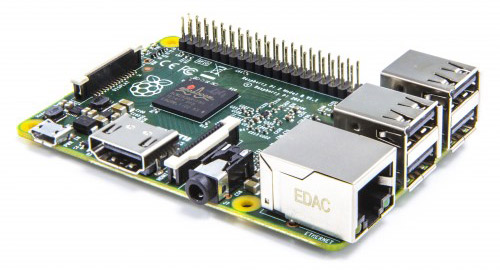 The Pi Foundation on Monday announced that it has released the latestversion of its “entry-level PC.” The Raspberry Pi 2 is now availablefor US$35, the same price as the previous Model B+.

This build-it-yourself computer features an 800MHz quad-core ARMCortex-A7 CPU, which will offer six times the performance of theprevious system. It also includes double the memory with 1GB LPDDR2SDRAM.

The Raspberry Pi 2 will be fully compatible with the Pi 1, andbecause it utilizes the ARMv7 processor, it can run a full range of ARMGNU/Linux software including Snappy Ubuntu Core and, notably,Microsoft’s Windows 10.

The Pi 2 is available now from retail partners including element14 andRS Components.

Anyone who builds a PC around the Raspberry Pi 2 will have immediateaccess to open source Ubuntu. Additionally, the Pi Foundation announcedthat for the past six months they’ve been working closely withMicrosoft to bring the forthcoming Windows 10 to Raspberry Pi 2.

The Pi 2 compatible version of Windows 10 will be available free ofcharge to those makers who purchased the system, the Foundation added.However, there could still be some limitations on what the Windowsversion might offer.

“This is an ARM based device which means that if it ran Windows itwould only run the ARM version of the product which didn’t run x86apps,” said Rob Enderle, principal analyst at the Enderle Group.

“That version you historically couldn’t buy, it was only sold to OEMs,but now for something like this they likely could get it for free, ornear free, so the product could ship with it and Microsoft might likethis because Raspberry Pi tends to be sold to hobbyists and developers– both of which Microsoft would like to engage on multiple platforms,”Enderle told TechNewsWorld.

Exactly what users can do with Windows 10 on this entry-level systemisn’t entirely clear at this point.

“The impact of Windows 10 is hard to determine,” noted Charles King,principal analyst at Pund-IT.

“At one level, it’s very significant, especially if you factor inassociated Microsoft’s security and Visual Studio development tools,and possible integration with Azure services,” King toldTechNewsWorld. “But at another level, supporting Raspberry offersMicrosoft a way to breathe life into Windows RT which more or lessflat lined due to the failure of the company’s Surface RT products andMicrosoft OEM partners abandoning the platform.”

The Raspberry Pi 2 could further answer the question “how low can you go?” But as a low end/entry level computing device it could have competition from other devices — especially since as a “computer” it still lacks necessary components such as a display, mouse and keyboard.

“Market ready products that would fall into this class are the sub-$100 tablets and low cost over the air products that have been hittingthe market; basically they are a very low cost core with a display andpackaging, Raspberry Pi just strips the case and the display outbecause developers and hobbyists would often like more displayflexibility,” explained Enderle.

“The over the air boxes, a lot of the home automation products, andanything that needs computing power-industrial equipment — can usethis as part of the development cycle to prototype software and roughout the product,” Enderle noted. “If this didn’t exist these firmswould incur additional cost building and testing something like this,Raspberry Pi is a far cheaper alternative for folks that wouldotherwise have to build this from parts.”

It is still a device that continues to appeal to hobbyists and theburgeoning maker crowd, but there is a limit to where that can take aproduct such as the Pi 2.

“There’s always been an element of ‘if you build it, they will come’but the same could be said of the Altair 8800 and other 1070s homecomputer kits, and look where that ended,” King added.

“The Raspberry folks see the new platform being aimed at the ‘makerpro’ community, which is to say advanced hobbyists and productdevelopers who see the value of the additional memory and performancepacked into the Raspberry 2,” King stressed. “Possible commercial usesreside mainly in Internet of Things (IoT) applications but that’s apretty broad area.”