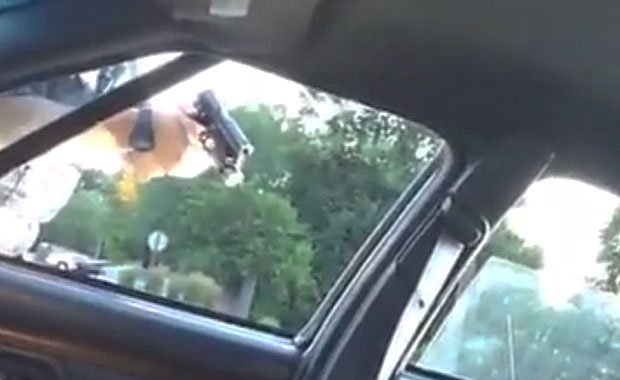 Americans have expressed outrage at Wednesday’s police shooting of Philando Castile, an African-American man, which happened in St. Paul, Minnesota, during a traffic stop for a broken tail light.

Castile was shot in front of his girlfriend Diamond Reynolds and their 4-year-old daughter, who were in the car.

Reynolds used Facebook Live to stream video of the aftermath of the shooting.

The graphic video, which shows Castile bleeding and groaning in pain while the officer who shot him curses and continues aiming his gun at Castile, had garnered more than 4.4 million views by Thursday evening, and nearly 300,000 shares.

President Obama posted a lengthy comment in response to Castile’s shooting and the police shooting earlier this week of another black man, Alton Sterling, in Baton Rouge, Louisiana. Sterling’s shooting was captured on video by several bystanders.

There were more than 16,000 comments on Reddit less than 24 hours after the shooting, many expressing outrage.

“There is no reason four shots should be fired from a foot away, especially when he let the officer know he had a concealed weapon,” wrote chemicalbeats37.

“I saw this guy’s last moments of life,” wrote doyou_booboo. “His last breaths. A mother in a state of shock, watching someone she cared about die. I saw a three year old witnessing something that she doesn’t fully understand yet, but which might have lasting repercussions on her psyche.”

A Twitter feed on the shooting also displayed the anguish of commenters.

"It's okay mommy. It's okay, I'm right here with you" #PhilandoCastile's girlfriend's 4yo daughter said to her mother. & I am broken.

A Gofundme campaign set up by Xavier Burgin to benefit the Castile family raised more than US$60,000 toward a goal of $80,000 in its first 19 hours. Upwards of 2,200 people contributed. Castile’s sister Moni also started a GoFundMe campaign, which had raised more than $16,000 toward its $30,000 goal in the first 12 hours.

Facebook took down the streaming video of the shooting for several hours but restored it after some users protested. Facebook claimed the takedown was due to a technical glitch.

In this day of citizen journalism and ubiquitous video, the role Facebook played in disseminating knowledge of the incident was critical. What legal, ethical and other issues do companies that offer live-streaming services face, as people use them to document events in real time?

“Typically, posting something that showcases someone getting shot would be an automatic delete,” said Rob Enderle, principal analyst at the Enderle Group.

However, that’s not the case “if it has to do with abuse of power and you position yourself as a news service,” he told TechNewsWorld.

Users have posted disturbing images on Facebook and other streaming services before.

Whether that raises legal and ethical issues “depends on whether the service is considered to be a common carrier with an obligation to not discriminate on the basis of content or use, or a publisher, constrained by considerations of copyright and fair use,” noted Mike Jude, a program manager at Stratecast/Frost & Sullivan.

“If Facebook’s a publisher that allows individuals to use its platform to post their content, it has the right to determine what gets posted,” he told TechNewsWorld. “However, if it’s a common carrier, then it can’t and shouldn’t, regardless of impact. That’s called free speech.”

The FCC is wrestling with the question of whether Facebook is a common carrier with a must-serve obligation, Jude said.

“There has been a lot of dispute regarding the liability of various intermediaries such as Facebook — which doesn’t necessarily fall in areas Congress envisioned when they passed various laws,” Yasha Heidari of the Heidari Power Law Group told TechNewsWorld.

There’s no hard-and-fast rule as to what is or isn’t allowed, so streaming services will “just simply accept the risk and moderate after the fact, doing their best to comply with known laws,” Enderle said. “The difficulty with any kind of censorship is knowing where to draw the line.”

Forget about ethical standards, which “seem to mean very little on the Internet,” Jude remarked. “I would say there are moral [arguments] for not publishing such content.”