There is now proof that a Nobel Prize-winning technology can deliver targeted therapy directly to cancer tumor cells, say a team of California Institute of Technology researchers led by Mark Davis, who published their findings in Nature. Their clinical trial showed that a specialized polymer nanoparticle injected into patients’ bloodstreams did indeed carry a genetic off-switch message to cancer cells, rendering their proteins unable to replicate. 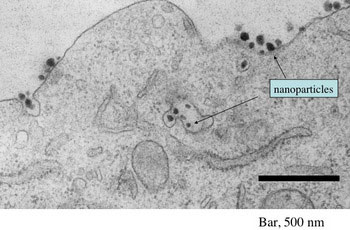 The targeted nanoparticle used in the study and shown in this schematic is made of a unique polymer and can make its way to human tumor cells in a dose-dependent fashion. (Credit: Caltech/Derek Bartlett)

“The importance here is being able to model and target the protein,” research team member Antoni Ribas, associate professor of medicine and surgery at the UCLA Jonsson Comprehensive Cancer Center, told TechNewsWorld.

Now that the nanotech-based method has been demonstrated, researchers can start working with it to develop therapies not only for cancers, but also for degenerative diseases such as Alzheimer’s and metabolic disorders such as diabetes, study team member Yun Yen, associate director for translational research at the City of Hope Comprehensive Cancer Center, told TechNewsWorld.

Researchers already knew that disabling cancer cells from replicating might hold the key to important advances in treatment. However, prior to this clinical trial, they had trouble targeting the specific proteins building the cells, which sometimes remain hidden in the folds of genetic strands.

This is where a discovery more than a decade old comes in. Nobel Prize winners Andrew Fire and Craig Mello found that shutting down cancer genes was easier when using RNA interference. This method uses double-stranded small interfering RNA chains (siRNAs) to cut the messenger RNA cancer cells use to repliate, rather than the RNA or DNA itself.

Researchers Fire and Craig made their discovery in worms, though, and before now, no one had shown that the siRNAs could be introduced into humans and make their way to targeted cancer cells.

The research is part of a Phase I clinical trial of the new therapy, in which potential treatments are first checked for safety in human subjects. Fifteen patients overall were involved, Ribas told TechNewsWorld. All had cancer, although their tumors varied in type.

Only three of the patients had cancerous cells biopsied to demonstrate the efficacy of the nanoparticles and siRNA, noted Ribas.

These patients had melanoma, a skin cancer, and thus the cells were easier to reach for biopsy, he explained.

The next step is for researchers to enroll more patients and complete Phase II and III clinical trials, Ribas said.

The cancer cell proteins targeted by the nanoparticle-delivered agent were indeed split at exactly the place the researchers intended, Davis said. This is the first time this mechanism has been demonstrated in humans, and its implications stretch to many forms of cancer and farther afield into other diseases. 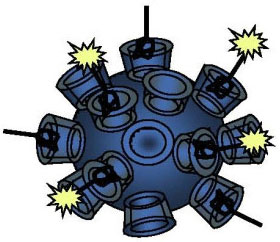 This electron micrograph shows the presence of numerous siRNA-containing targeted nanoparticles both entering and within a tumor cell. (Credit: Caltech/Swaroop Mishra)

“In principal,” Davis said, “that means every protein now is druggable because its inhibition is accomplished by destroying the mRNA.”

The problem for researchers up to now has been getting the interference chemicals into the cells themselves — in this case, cancer cells. Davis’ team has developed a unique polymer that can self-assemble into a nanoparticle that contains the siRNA. The team has shown that the nanoparticles reach cells in different concentrations based on different doses, which means that there are possibilities for tailoring dosages of disease-fighting siRNA on a disease-by-disease, or even patient-by-patient, basis.

Now that a delivery platform has been established, Yen said, researchers need not stop at delivering agents that interfere with cell growth. They can also develop ways to repair the cellular damage caused by aging.

“We also could deliver a gene to rejuvenate the cell,” he said. “In this study, we already can see that we can inhibit a cell; what I’m saying is that we also can enhance it.”