On Oct. 30, Verizon Wireless is widely expected to launch the Motorola Droid, its entry into the Android smartphone market.

It’s ramping up to the event by kicking off an ad campaign that appears to put the Apple iPhone firmly in the crosshairs. 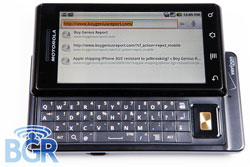 Although Verizon hasn’t officially announced details of the phone, The Boy Genius Report has posted a review as well as supposed photos of the device. The only information Verizon is currently offering is a teaser Web site.

Formerly known as the “Sholes,” the Droid is slightly thicker than an iPhone 3GS and has a slider keyboard, according to The Boy Genius Report. It is made of metal and very sturdy.

The Droid is also very fast, according to the review. Its QWERTY keyboard has a soft-touch rubberized finish, but the keyboard design may not yet be entirely finalized. The Droid will be shipped with a desktop cradle-cum-charger that will turn it into a multimedia station.

The Droid’s speed may come in part from a 600 MHz TI OMAP 3430 CPU, as reported previously in LinuxInsider. This is a multimedia applications processor that TI claims delivers up to three times better performance than ARM 11-based processors.

The Droid supports microSDHC cards, according to leaked specs published by AndroidAndMe. It has a 5 MP camera with autofocus and video recorder. Its 3.7-inch display offers a resolution of 854 by 480 pixels and supports 16 million colors.

The Droid reportedly won’t be released with BLUR, the Motorola adaptation of Android. Motorola declined to confirm or deny that. “Right now there is no additional information we have to share on our next Android-based device, but please stay tuned for upcoming news,” Motorola spokesperson Kathy Van Buskirk told LinuxInsider.

The review posted by The Boy Genius Report glows with positive comparisons to the iPhone, and it appears Verizon wants to directly challenge Cupertino with its marketing strategy. However, the Droid may not pose a very serious threat to the iPhone, according to Carl Howe, director of anywhere research at the Yankee Group. “Every carrier wants a phone that can take on the iPhone,” he told LinuxInsider. “This is Verizon’s third try after the BlackBerry Storm and Storm2. If this doesn’t do the trick, we’ll just have to wait for Verizon to get the iPhone 4G, which is rumored for next year.”

Also known as “Eclair,” Android 2.0 appears to be a major improvement on earlier versions of Android, according to another post on The Boy Genius Report. It offers built-in compatibility with Microsoft Exchange and has a unified inbox. However, this inbox won’t work with users’ Gmail accounts because it has its own Gmail application.

Google Maps has been updated in Eclair to include Layers, so users can overlay search queries, Wikipedia entries, Latitude buddies, and other information. Eclair appears to include some multi-touch gestures such as two-finger tapping, but it does not have zoom-out gestures or offer pinching.

“The Android folks are learning from past efforts, which is generally a good thing,” Allen Nogee, principal analyst at In-Stat, told LinuxInsider. “The group is much more organized than it was from the start, and this has resulted in a more coherent product.”

While Eclair’s browser is better than earlier Android browsers, it does not have Flash 10, according to The Boy Genius Report. The reviewer pointed out, however, that this is not the final build of Eclair, and the operating system may be tuned up further.

“As we have not announced Android 2.0 and we don’t pre-announce features, we unfortunately have nothing to share at this time,” its spokesperson, Carolyn Penner, told LinuxInsider.

Google and Verizon earlier this month announced a strategic partnership that would see both companies investing heavily in creating, marketing and distributing products and services. In essence, that could give Verizon dominance of, if not a lock on, Android applications, services and devices.

On Sunday, Verizon Wireless ran a television ad dissing the iPhone over its lack of a physical keyboard, its inability to multitask, and its camera’s inability to capture images in dark conditions. The ad also slammed the iPhone for being a closed platform. “Everything iDon’t, Droid Does,” the ad stated.

On Monday, Verizon Wireless unveiled a new Web site that leads with similar criticisms of the iPhone.

Verizon Wireless’s main site also includes a dig against Apple, with the slogan “Want 5 times more 3G coverage than AT&T? There’s a Map for that.” This echoes ads for the iTunes App Store, which use the catchphrase “There’s an app for that.”

While the ads may be clever, that doesn’t mean Verizon and Google will make any headway against the iPhone. “iPhone killers always look good on paper,” the Yankee Group’s Howe said. “We’ve got to see the real prices, plans and performance before we can judge how much of a threat the Droid is.”

Motorola and Verizon have their work cut out for them if they want to take on the iPhone.

“So Verizon and Motorola, two companies that have lagged behind in the smartphone area, suddenly release a device and say it will change the world? I think it will be difficult in such a competitive environment,” In-Stat’s Nogee said.

“Consumers will have to [decide] whether they want a new and somewhat unknown phone platform on a good network or a known, good iPhone experience on an OK network,” Howe pointed out. “Apple has a much higher brand value and consumer cache than Motorola at present, and that’s going to affect consumer choices.”