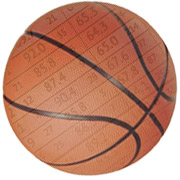 The contact page of Ken Pomeroy’s website, kenpom.com, contains all the standard fare — a disclaimer, an email address, a note for subscribers.

Below that, however, there is a brief note for media members, and it’s telling.

It starts normal enough, with Pomeroy insisting he is happy to do interviews or help with stories and so on. Then there’s some text that has been struckthrough: “…but I have a day job which occasionally does not permit me to chat with someone at a moment’s notice.”

That section has been voided because Pomeroy’s day job no longer interferes with his website: His website is his day job.

Pomeroy has turned his hobby of analyzing basketball stats into one of college sports’ most talked-about websites — and, in the process, has created a brand that is no longer merely a labor of love. It turns out there’s a market — a paying market — for Pomeroy’s analytics, which include in-depth study of things like rebounding rate, defensive efficiency and tempo-free stats. Like baseball guru Bill James, who pioneered sports analytics with his annual baseball abstracts, Pomeroy has unearthed a new way of looking at sports, and has found a medium and business model that have made his analysis a singular success.

In this TechNewsWorld podcast, Pomeroy talks about the evolution of his website, the science of using a paywall, and the prospect of going the way of Nate Silver and latching on to a mainstream outlet.

Here are some excerpts from the podcast:

TechNewsWorld: It’s been interesting to watch your site become so mainstream and so entrenched over the past several years. I know it’s message board fodder across the country, and journalists are constantly referencing it, and more and more you hear coaches reference it as well. It’s really hard to follow basketball and not know about it. This seems to be testament to the fact that there is definitely a market and definitely an interest for the sort of in-depth statistical analysis that a few years ago or 10 years ago might have seemed really obscure.

When you started the site, though, in 2003, it was kind of a different climate surrounding discussions of statistics and the way that people analyzed sports. Did you sense that there was an untapped market for this sort of analysis, or has the market growth kind of coincided — I don’t know, not because of your site, but kind along with your site?

Ken Pomeroy: Yeah, a little bit of both. You know, when I started doing this 10 years ago, the analytics side of baseball was already maturing, and that’s kind of what gave me the idea to jump into this. I looked around and there wasn’t anything about college basketball, which is my favorite sport. So I felt like — I certainly didn’t have the vision that it would end up being what it is today, but I did feel like I would have a small audience because nobody else was doing this kind of stuff.

So once I got the ball rolling, and coaches started seeing this, media started seeing this, and things kind of spread by word of mouth, acceptance grew and grew. But you already kind of had that idea the way things had kind of moved in baseball at that point, that you would have acceptance in other sports if you just kind of put this information out there for people to see.

TechNewsWorld: A while back I wrote an article about recruiting service websites in the Rivals.com and Scout.com network. I knew that these websites were raking in six figures, often north of a half-million bucks a year, from subscriptions. And when I talked to the publishers of these sites, one of the big takeaways I had for why they were so successful, and why they had so many readers, was that they had info that nobody else had, info that people really wanted, and then they barricaded it behind a paywall. So it was kind of their formula that they had these nuggets, and they weren’t going to let you see them unless you paid.

You kind of had a different approach, at least for the beginning of your site — it was all free until 2011, when I know you started offering certain paywall-blocked content. What was your approach to whether or not to charge, and how to utilize the paywall, and therisk/reward associated with barricading some of your content behind that?

So over time, as I gained more and more of a following, this stuff was cited in the media more, coaches started using it, publicly expressed, you know, that they used it to gain an advantage — as that happened, and I had to invest more time in it, it sort of became necessary to consider how I might turn this into something that I could do full-time. And those recruiting websites are sort of a good model, really. They don’t set up their paywall the same way I do, but just knowing the fact that they could charge a hundred bucks a year, and they had tons of people apparently buying subscriptions, I felt like, hey, if I could just get my toe in the water and charge some small fee for this, I should do alright.

So that’s what I did two years ago, I tested out that kind of model. And it was pretty successful. I still keep kind of the main data free, so for the noobies out there, they can still see the information that they want without having to pay for it. But if you want more detailed information, you pay a fairly small fee and I think it ends up being worth the money.

Pomeroy: Yeah, 20 dollars for 12 months. And you know, that’s probably not the optimal price point — I could charge more and make more money. I’d have fewer subscribers; it might be better for me, I don’t know. But I kind of wanted a really small price point so the people that wanted this information could pretty much afford it across the board. And the people that didn’t want this information obviously wouldn’t want to buy it anyway, so that’s kind of why I chose that.

TechNewsWorld: A lot of people who have run hyper-successful blogs like yours have eventually been snatched up by more traditional media outlets. I think Nate Silver is probably the most obvious example of this — he was authoring a political analysis blog, forecasting election results, and he later wound up with The New York Times, and he became an even bigger deal there and was a huge source of traffic for them, especially during this last election cycle.

With your popularity, and with your site’s brand that you touched on earlier, I have to imagine that “traditional” media outlets have been contacting you, or they will be contacting you, about joining their coverage. How do you balance the pros and cons of having, you know, potentially a broader reach, and maybe not having to worry about subscribers, by joining one of these sites or one of these outlets, versus the autonomy and kind of the cool factor of having your own thing that you started yourself? How do you look at that?

Pomeroy: Yeah, that’s a great question. By nature I’m a pretty independent person, pretty possessive. I mean, this is something I started from scratch, so I feel pretty strongly that I wouldn’t want somebody else interfering with that. That’s always in the back of my mind. And people have reached out at various times with some feelers about taking over my site or incorporating it into their bigger website, and so there are pros and cons.

I think the biggest benefit would be that there’d be a lot less labor on my part maintaining things. So that’s appealing. But the cons are, you know, I lose that independence. I pretty much — I do some freelance work for ESPN.com, I occasionally contribute to some other sites — but I’m pretty independent right now. I don’t have to worry about any employee policies or anything like that. I can kind of do whatever the hell I want — that’s appealing as well.

And the site’s been successful; they subscription model has been really successful. So if somebody wants to, you know, come in and make me an offer, it has to be something that would be somewhat in the ballpark of how well I’m doing now. And I think that is a challenge, too. I don’t think other websites understand the value of what I have yet. So nobody’s really ever made really a serious offer that I’d have to contemplate. Maybe down the road that’ll happen, and certainly I’d be open to that, but we’ll just have to see how it goes.