Word processing is perhaps one of the most essential uses for acomputer on any platform. The Linux OS offers more obscure wordprocessors than other OSes; however, few of these apps offer usersthe staying power of AbiWord. 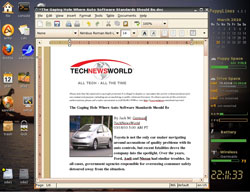 The closest competitor to AbiWord is OpenOffice Writer, though AbiWord, like many other word processing apps inLinux, lacks a fully developed suite of programs such as spreadsheetand presentation apps that rival the functionality of OpenOffice. Still,it excels at processing words and is far ahead of other Linux writingtools.

Linux users can shuffle among word processors such asKWord, Tedand Maxwell, among numerousothers. Often, the distinguishing factors with these writing apps aretheir feature sets. Many of them are little more than glorified richtext editors.

When it comes to choosing a full-fledged word processor, I have a veryexacting two-part standard. It must display the online pages of Websites that run my articles. I copy and paste the screen contentdirectly into a blank word processing page. And it must handleMicrosoft Word docs without my going through hoops. Like it or not,Microsoft Word is the industry standard. I have both AbiWord andWriter tweaked to always open and save files in Word format.

Early on in my migration to Linux from Microsoft Windows, I favoredOpenOffice Writer because it comes with a suite of other apps that reliablyopen Microsoft PowerPoint and Microsoft Excel files. But since then, Ihave developed a working affinity for AbiWord for word processing.AbiWord does not have presentation and spreadsheet apps so it is not acomplete office suite replacement.

AbiWord, though, rarely crashes when handling graphics-laddendocuments. OpenOffice Writer, by comparison, often buckles under theload in both my Ubuntu and Puppy Linux OSes on all five of mycomputers.

AbiWord is a multiplatform word processor. It runs on all flavors ofLinux, Microsoft Windows, QNX, FreeBSD and Solaris. It is tightlyintegrated with the operating system, taking advantage of the Linuxfunctionality for image loading and printing capabilities.

It has the look and feel of Microsoft Word but has far fewer of Word’scomplexities. This makes AbiWord much easier to use without constantlyscrolling through the user documentation. It reads and writes tonearly three dozen file formats. These include Portable DocumentFormat (.pdf), Office Open XMS (.docx), Outlook Express Email (.eml),OpenDocument (.odt) and Applix Words (.aw), Rich Text Format documents(.rtf) and HTML Web pages.

Its advanced document layout tools are a breeze to use. It isrelatively easy to put a professional spin on the appearance ofdocuments containing tables, bullets, lists, images, footnotes,endnotes and styles with AbiWord.

AbiWord is relatively small and requires much fewer resources to runthan other writing apps. This compact size makes AbiWord thehands-down choice of Linux OS developers of portable or embeddedconfigurations. This also makes it an ideal choice for older hardwarewhere RAM may be an issue.

AbiWord fits right into any office environment, regardless of languageor document style required. For instance, it has dictionaries for morethan 30 languages.

Mail Merge capability is an often-forgotten tool in many wanna-bebusiness-class word processors. Not so with AbiWord. Its Mail Mergetool automates that task with special fields inserted into a templatedocument. These codes guide the insertion of data from RelationalDatabases, Comma Separated Text files or Tabbed Text files.

One of AbiWord’s unmatched features is how it works in a serverenvironment. It has a command line interface that allows users togenerate form letters, print documents or convert documents to anyfile format AbiWord supports.

One really cool feature, and one that could be a boon to organizations that must rely onshared documents: More than one person can work on the same documentconcurrently.

This is possible thanks to the close integration of AbiWord to thefree AbiCollab.net Web service. Storing collaborative documents onlineallows easy document sharing and format conversions on the fly.

This feature is fully available in the latest release, AbiWord 2.8.1released late last year. However, if you do not need the collaborativefeature with AbiCollab.net, earlier versions of AbiWord are no lessadequate.

I have the latest version on my two Ubuntu configurations and version2.6.3 on my Puppy Linux machines because it is “hard wired” into thestart-up files. Most of the functionality I use daily is available inthe earlier version.

However, version 2.8.1 has some enticing enhancements that make upgradingworth your while. For example, it has real smart quotes and high-quality True Scalable Vector Graphics (SVG) support.

I particularly like the ability to view multiple pages side by side.This feature lets me get more use out of the real estate on mywide-screen monitors.

As part of the stronger emphasis on collaborative writing, AbiWordnow can distinguish text written by different writers using varioustext highlight colors. This real-time editing updating only works withdocuments stored on the abicollab.net server.

Using annotations or comments is much more effective in this latestversion as well. I can annotate any piece of text with a remark thatwill show up when I hover over it with the mouse. A list of allremarks can be displayed in the footer area on every page.

AbiWord now uses a rewritten printing framework based on Cairo, a 2-Dgraphics library. Cairo produces consistent results on all outputmedia while taking advantage of display hardware acceleration whenavailable, for instance, through the X Render Extension.

This results in better image printing. Instead of continuing with aprinting system based on the GTK port, AbiWord now relies on the gnomeprint system. Putting all that techno-talk aside, I am pleased withthe printing results in version 2.8.1.

AbiWord is a very capable word processing program. It is easy to useand has a very low learning curve.

Few word processing programs can perform close to the level reached byMicrosoft Word. You will not find all of the bloated and seldom-usedfeature sets bundled in proprietary apps. However, AbiWord meets or exceedsexpectations for the typical writing tasks done in small or largebusiness settings.

You will need alternatives for presentation and spreadsheet apps.

However, AbiWord creates and prints smart-looking word documents withlittle or no training. This makes it a very good choice for everydaywriting needs.