Taiwanese computer manufacturer Acer, which seems to be having an on-again, off-again relationship with netbooks running Android, is now reportedly working on one.

Jim Wong, the firm’s president of IT products, made the announcement Tuesday at Computex Taipei, Asia’s largest computer exhibition. 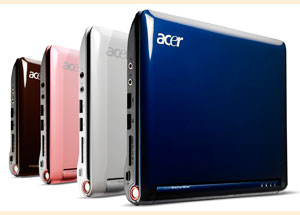 The first Acer model to run Android will be the Aspire One, according to reports.

Acer is expected to begin shipping the Android netbooks in the third quarter of this year.

In the past, Acer has nixed the idea of pairing its netbooks with Android, an operating system used in one variety of smartphone in the U.S. (the T-Mobile G1), as well as several others available elsewhere in the world. Many Android phones are reportedly in production.

At a press conference called to launch Acer’s new line of consumer and business computers in early April, both Wong and company CEO Gianfranco Lanci said that Android was not quite ready for use in netbooks.

Acer, like other computer manufacturers, was testing Android in netbooks, according to Lanci.

However, he described Android as being tailored for communications, and said Microsoft’s Windows operating systems were better suited for computing tasks.

Netbooks running Windows were outselling those running Linux, he added at that time.

The Acer Aspire One

At Computex, however, Acer made something of an about-face. The Aspire One, which will be shipped with Android, has been available with Windows XP Home Edition SP3 or Linux for some time.

Linpus Linux Lite was written to run on devices with lower-cost hardware, such as netbooks.

The Android version could ship with dual operating systems — the second being a Linux OS.

It is based on the Intel Atom platform. “Atom” is Intel’s brand name for a line of x86 and x86-64 CPUs intended for use in mobile Internet devices, smartphones, netbooks and ultra-mobile PCs. Atom processors focus on low power consumption rather than on performance.

Acer will continue using the Intel Atom in the Aspire One running Android, rather than chips based onARM, another large contender in mobile electronics.

Android was ported to run on the Intel Atom processor by Taiwanese firm Insyde Software, which mainly produces EFI-compliant software, according to reports. “EFI” stands for the Extensible Firmware Interface. between an operating system and firmware. Think of it as the next-generation of the BIOS (Basic Input-Output System).

The EFI specification was developed by Intel and is now managed by the Unified EFI Forum.

Intel has another connection to Insyde: Through Intel Pacific, it invested in the firm.

Acer plans to unveil its Android-based Aspire One in the third quarter.

However, that could put it behind China’s Guangzhou Skytone Transmission Technologies, which is reported to be putting its own Android netbook through final testing.

HP and Dell are also said to be interested in Android netbooks.

Several other chipmakers who use the ARM processing core also demonstrated their netbooks at Computex.

“We had Freescale, we had Nvidia, we had Qualcomm,” Ian Drew, executive vice president of marketing at ARM, told LinuxInsider. “Some of their devices ran Android — some did not.”

Cost could be one factor driving vendors to the Android platform. “The license fee for Microsoft XP on the netbook is pretty low, about (US)$25 or so, but it adds up,” Sterling said. “Vendors could be looking for an alternative to Microsoft.”

Of course, Android could be interesting in and of itself to Linux lovers. “Android overcomes some of the fragmentation of Linux,” ARM’s Drew said, “but so does Ubuntu, in its way. … It’s just that Android has a slightly bigger brand.”

Drew expects a variety of Android netbooks to come to the market. “You’ll see lots of different devices with different screen sizes and all that, and you can differentiate in quite a few interesting ways.”