More companies are joining in the fight over Internet taxation begun by Amazon.com.

In all three states, lawmakers are considering or have passed legislation that would require collection of sales tax from customers who purchase from online sites that have affiliate programs in that state. Other states may follow suit as they try to find ways to replace revenue that has evaporated in the recession.

Most states already tax online purchases from sites run by companies that have traditional storefronts in the state, such as Best Buy or Wal-Mart.

However, Amazon and the other online retailers argue such legislation is unconstitutional because, to quote Blue Nile’s letter to affiliates, “it requires sellers with no physical presence in the state to collect sales tax on sales to buyers in that state.”

Blue Nile is evaluating whether to take similar action in other states, spokesperson John Baird told the E-Commerce Times.

Amazon.com officials did not respond to a request for comment left with the company’s media relations office.

Affiliates Too Important to Brush Off

“Strategically, Amazon is farming more and more of its business to those affiliates,” he said. “They’re trying to create more of a marketplace. This is very important to Amazon’s present and future.”

On the other hand, customer behavior data shows that sales tax avoidance is a relatively small factor in deciding whether to buy an item locally or online, Cundiff said.

That means Amazon isn’t likely to lose much in sales to traditional retailers if they’re both taxed.

The changes could mean more to big-ticket retailers like Blue Nile or Tiger Direct, a computer and computer parts dealer.

“I think it makes more sense for companies like Blue Nile to jump in on this,” he said. “For Amazon, at the end of the day, it’s cutting off your nose to spite your face.”

Amazon is probably not bluffing, said Cundiff. That said, it’s unlikely the company would pull the plug on affiliate relations in California if that financially strapped state moves forward with a proposal to tax the site’s customers.

Such tax policies would backfire on states — and the country as a whole — if allowed to stand, said Overstock.com President Jonathan Johnson.

“Internet advertising is a tidy little business that can be done by just about anyone, anywhere on the globe, and when states unwisely and unconstitutionally pass these laws, their local Internet ad business will quickly go dark, and that ad business will simply migrate to states more friendly to Internet commerce,” explained Johnson. “In the end, the only thing to be accomplished by these laws will be to put more local citizens out of work — exactly the wrong choice in a down economy.” 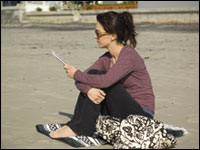