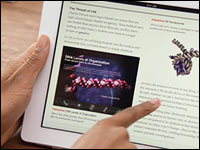 Apple has reached a settlement with plaintiffs in 33 states regarding allegations that it colluded with five major U.S. book publishers to fix the price of e-books. The class action maintained that Apple overcharged plaintiffs US$280 million.

News of the settlement came on Tuesday via a filing with U.S. District Judge Denise Cote by Steve Berman, an attorney representing some of the plaintiffs. Terms of the settlement have not been disclosed and still need to be approved by the court.

One variable that could derail the agreement is Apple’s pending appeal of a related antitrust ruling last year, in which it was found guilty of price-fixing. The settlement payment will depend on the outcome of that case.

The earlier case stemmed from a Justice Department prosecution two years ago charging that Apple banded together with five book publishers to blunt the inroads Amazon had made in the e-book market following its successful launch of the Kindle e-reader. Until that point, most e-books were priced at $9.99.

The court ruling last year found that Apple negotiated “fiercely and separately” with the publishers and they eventually settled on a $14.99 price point for e-books. Then, they sought to pressure Amazon into accepting that higher price.

Apple maintains that its actions didn’t violate antitrust laws and its appeal is pending.

In the current matter, the court will have to approve the settlement, as is always the case, but making it contingent on the outcome of the appeal adds another layer of uncertainty to the deal, said David Leichtman, partner at Robins, Kaplan, Miller & Ciresi.

“While the details will not be available until mid-July, the contingent nature of the settlement amount indicates that there may be what is referred to as a ‘high-low’ deal, where the class will receive one amount if Apple wins the appeal and a larger amount if Apple loses,” he told the E-Commerce Times.

“But courts do not like to be used in such a manner, and this raises the question whether the Second Circuit is essentially being asked to render an advisory opinion, which is normally not permitted,” Leichtman continued.

In short, it remains to be seen if the district court will approve the settlement, he said.

If the provision were to be approved, it could have a broad impact on class actions generally, Leichtman observed. Defendants likely would want similar structures in class actions going forward.

If the deal does go through, it appears Apple will have settled for substantially less than the damages sought, observed Charles Sizemore, a portfolio manager on Covestor.

“The truth is, even had the worst-case scenario come to fruition, it wouldn’t have had much of an impact on Apple,” he told E-Commerce Times.

“Apple generates more than $50 billion per year in cash flows from operations. Putting that in perspective, Apple could have paid the entire settlement with less than a week’s worth of cash flow,” Sizemore said.

For consumers and publishers, the stakes were a little higher, as readers massively benefited by Amazon’s cut-rate pricing, he pointed out. Even taking that into account, though, this episode was fairly benign as antitrust issues go.

“Faced with the possibility of paying less at Amazon and more at Apple, most consumers would gravitate to Amazon,” Sizemore said, “and in any event, even if the Apple model had pulled prices significantly higher industry-wide, e-books as a general rule remain significantly cheaper than their hard-copy versions.”