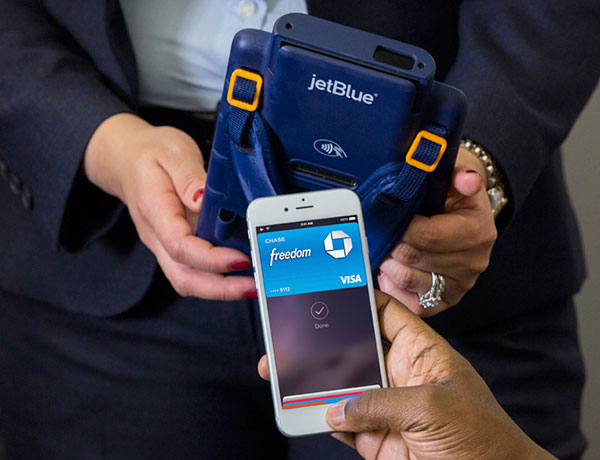 JetBlue on Tuesday announced that it will accept payments through Apple Pay in-flight.

Passengers with an iPhone 6, iPhone 6 Plus, or an Apple Watch, will be able to use Apple Pay to purchase snack boxes, food, beverages, onboard amenities and better seating.

JetBlue will accept Apple Pay on select flights from New York to Los Angeles and San Francisco beginning in mid-February, and will roll out this capability on all flights by June.

Apple Pay’s growing success will be good for enterprise mobility specialists such as Copper Mobile, because “whenever a new technology like Apple Pay hits the market, we know our partners are going to look to us for guidance on whether, or if, they should embrace the new technology, and how to do so most efficiently and effectively,” Copper Mobile spokesperson Andrew Stern told the E-Commerce Times.

JetBlue will issue iPad Minis and NFC-enabled cases to more than 3,500 airline stewards and stewardesses. The iPad mini cases will also be able to process credit card payments.

Each tablet will be preloaded with a custom-designed iOS app — the “Inflight Service Assistant” — which will provide users access to customer manifest and flight data.

The app will let crew members identify TrueBlue and Mosaic loyalty members by name, and provide them with personalized information to, for example, give them birthday greetings.

Later this year, JetBlue customers will be able to use Apple Pay to complete purchases in JetBlue’s mobile iOS app.

JetBlue’s venture with Apple Pay is a continuation of its partnership with Cupertino.

The airline provided iPads to all of its pilots in 2013 for use in-flight to access real-time weather and updated safety and flight documents.

Apple Pay, launched in September, appears to be pulling ahead of three-year-old Google Wallet and Softcard (formerly known as ISIS), which was created jointly by AT&T, Verizon and T-Mobile.

CurrentC is another mobile wallet app from the Merchant Customer Exchange, whose members include Wal-Mart, Best Buy, Target and 7-Eleven.

A trial version of CurrentC was launched after Apple Pay was released. It runs on both iOS and Android, but has not fared well so far, and was hacked in October.

CurrentC “has some significant advantages given the cadre of powerful retailers behind it, but they’re walking into a fight with the 800-pound gorilla [Apple],” Stern mused.

How is it Apple Pay is making headway when competitors are just limping along?

“It’s a self-contained system within one brand,” Jeff Cotrupe, a research director at the Stratecast service of Frost & Sullivan, told the E-Commerce Times.

The service is run by one company, unlike Google Pay, which works with various third parties much like credit cards do, and so “vendors know they’re dealing only with Apple. They get an idea of the traffic being driven onto the carrier networks, and when you use it, you feed more data back into the system,” Cotrupe elaborated.

Apple “already has a lock on consumer confidence,” Copper Mobile’s Stern said. “They dominate the smartphone market and do so within a demographic retailers and advertisers want to reach.”

The most important factor, though, is Apple’s legitimacy, Stern pointed out. “The instant Apple bets big on a new technology or platform, the entire business world takes notice. Its ability to predict where the market will be in the future has been stellar.”

Apple Pay’s success “will most likely pave the way for the continued success of Google Wallet,” Stern predicted. However, CurrentC and other retailer-specific solutions will probably lose out in the end.

JetBlue did not respond to our request to comment for this story in time for publication.