Apple to the Core: iPad 2 Is a Dominator 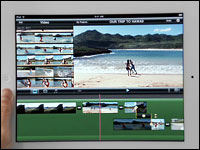 “It” is the iPad 2. With about 600,000 iPad 2 units sold in the first three days of shipment — a pace of sales roughly twice as fast as last year’s initial product launch — the iPad can now officially take its place in the pantheon of celebrated phenomena alongside the hula hoop, the Rubik’s cube, Elvis, Marilyn, Beatlemania, Bieber fever, et al.

Faster than you can say “I gotta have it” Apple’s iPad 2 flew off the shelves on Friday and Saturday, dashing any notion (as well as the hopes of more than a few competitors) that the public’s appetite for the device has waned in the past year.

The iPad 2 was out of stock at every one of the more-than three dozen Apple retail stores I phoned over the last 72 hours. The phone lines were jammed, and I spent about five to 10 minutes on hold at the busiest locations.

All of the beleaguered Apple Geniuses who answered the phones during my informal spot check of the more-than-200 Apple Stores nationwide told the same tale. Their respective inventories of the iPad 2 tablets sold out within hours of going on sale Friday.

The lucky ones — usually located in busy states like California, Florida, Illinois, Massachusetts, New Jersey, New York and Texas — got a second shipment on Saturday, only to have those fly off the shelves in short order, too.

About one-quarter of the Apple stores I called said they were expecting/hoping for new shipments on Monday or Tuesday, while the rest simply didn’t know and just instructed me to call back and keep checking.

The Apple Geniuses were also in the dark about how many of the iPad 2s they were scheduled to receive, but several disclosed that they planned on opening at least an hour earlier to handle the anticipated crush of customers.

Lead times for online orders for all iPad 2 models: the 16 GB, the 32 GB and the 64 GB WiFi-only and WiFi+3G are all running at three to four weeks, according to Apple’s website. If the demand continues at this rate, it’s very possible that the backlog could grow to six to eight weeks.

So what’s fueling the Apple iPad 2 adulation? And can any of Apple’s tablet rivals make a perceptible dent in its unit shipments and market share?

Apple set the bar high for itself when the original iPad was a runaway success, selling more than 15 million units from April through December 2010. Apple knew it had to top itself and stay ahead of competitors like HP, Motorola, Google and Toshiba, which are all hot on its heels to take a bigger bite out of the iPad 2’s market share.

The iPad 2 incorporates a dual-core A5 chip for faster Web surfing and improved multitasking capabilities; 9x faster graphics and 10 hours of battery life. The latter is welcome news for road warriors — whether you’re traveling on business or packing the kids in the car for a long drive to visit Grandma or your favorite vacation spot.

It’s also equipped with two cameras — front and back — that are optimized for FaceTime video calling. The cameras work in concert. The front camera lets you exchange greetings face-to-face with friends or colleagues, and you can use the back camera to pan to your surroundings while you’re engaged in the video chat. The cameras also let you film in HD.

Apple, whose early Macintoshes were always among the most costly computers on the market, has sagely adopted a more aggressive pricing strategy. The new and improved iPad 2 costs the same as the initial 1.0 model. Prices start at US$499 for the basic 16 GB WiFi model and go up to $829 for the 64GB WiFi+3G versions. Apple has thrown down the gauntlet, challenging rivals to match it feature-for-feature at the same price points.

Dozens of users the Apple support forum have already reported “slight to significant” white and yellow light leakage on their iPad 2s on both the display area and around the bezel. The leakage is visible in dark rooms and low lighting; in natural or bright light it appears as blotches on the display screen but is generally much less noticeable.

A certain amount of light leakage is common in smartphone and tablet devices (this flaw also occurred in the original iPad as well as in the iPhone ), and a percentage of light leakage problems resolve themselves with use, but that’s not always the case if it is due to a severe manufacturing defect.

Users on the Apple support forum were miffed at the extent of the leakage, which they deemed unacceptable. Their disappointment was magnified by their current limited choices: They can return affected tablets to an Apple Store for a refund or exchange.

However, since the overwhelming majority of the retail outlets are sold out, the users face the prospect of waiting for days or weeks for a replacement. And there’s no guarantee that the replacement iPad 2 tablets won’t have the same defect.

So far, there’s no official word from Apple on the cause or extent of the light leakage problems or what it is doing to resolve the issue. However, the Apple Geniuses that I spoke to at various retail outlets were aware of the issue and said they would refund or replace any defective units.

What is known is that Apple used a different manufacturing method to attach the iPad 2 display screen to the unit than it did with the original iPad model. The first iPads that shipped in 2010 held the screen in place with clips. The iPad 2 displays are connected to the unit with bonding agents.

Speculation is rife that because of the high demand, iPad 2s, which are manufactured in China, are shipping at such an accelerated rate that the bonding agent hasn’t had sufficient time to dry.

Some inventive users have already devised nostrum remedies. One reported that he put a couple of good sized books on his device overnight to speed up the “bonding” process, while another left his device in the freezer for a few hours to similarly make the display stick and minimize the leakage.

With a few notable exceptions, users who bought iPads last Friday, experienced light leakage, and then opted to return them, praised Apple for excellent customer service. However, one angry customer did report that the Apple Genius at his local retail outlet told him that the light leakage was “a feature of the iPad 2.” Yikes!

Overall, while some early iPad 2 adopters were disappointed due to the problem, most opined that they liked Apple products so much, it wouldn’t stop them from using them. Interestingly, I didn’t see or hear of any posters who said they intended to switch to another tablet device.

That brings us to the inevitable question: Since users have an ever-increasing array of tablets from which to choose, will any, some or all of them defect from Apple’s iPad in substantial numbers?

The answer, at least in the short term, appears to be a resounding “No.” It’s been more than a year since Apple first unveiled the iPad and jump-started what had been a stagnant tablet market.

Since then, some very strong competitors have entered the market with their own feature-rich offerings in a variety of configurations from 5-inch to 10-inch displays, and at varying price points — from less than US$200 to $1,000. These include the Research In Motion BlackBerry Playbook, the Dell Streak, the HP TouchPad and HP Slate, the Lenovo IdeaPad, the LG G-Slate, the Motorola Xoom, the Samsung Galaxy Tab, the Sony Dash and tablets running Microsoft’s Windows 7 operating system that are aimed at businesses.

Despite the veritable onslaught of competitors with deep pockets and aggressive countermarketing campaigns, the iPad remains the tablet of choice. It far outpaces rivals with close to 20 million units sold and an estimated 65 percent market share.

Apple is as dominant in the tablet market as Usain Bolt was in the 100- and 200- meter relay race in the 2008 Olympics or as Secretariat was in winning the 1973 Belmont Stakes.

Usain Bolt and Secretariat both so utterly dominated a classy group of competitors that their races were over in the first few strides. Barring an extraordinary mishap on Apple’s part or an incredibly revolutionary product from one of its many rivals, it looks as though the iPad has an insurmountable lead.

Microsoft Could Muscle Back Into the Mobile Market