Some system utilities do a variety of things well. They come withtools to give users lots of solutions in one package. Other systemapps like the Atol File Manager perform a dedicated functionflawlessly without adding other specialties. Atol took a while to growon me, but now this app is one of my most-used Linux tools. 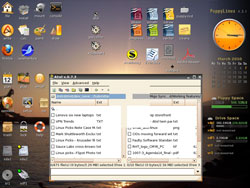 When it comes to file manager applications, that comparison spellsout the philosophical design differences of the Atol Twin Panel filemanager and the Krusader file manager, also a twin panel app, which Irecently reviewed.

Written using GTK+ toolkit and C++ programming language, Atol is aclassical dual-panel file manager ported to Linux and Windows OS. Ifirst gained the acquaintance of this little-known file manager as aworkhorse utility on my Windows XP desktop. It became my comfort zonewhen I moved to the Puppy Linux desktop.

Computer users, like political followers, are generally born into anOS platform. They adopt whatever system is used at home, or at school,or in the office, for instance. It takes a deep personal conviction and a strongpersuasive argument to drop one political party in favor of another.

That’s the process I followed in migrating from Windows to Linux. Ileft the fold of my computing background in search of better answers,so to say.

Atol File Manager was an easy-to-use application in Windows, so Icontinued to use it in Linux. It helped me to master the differentfiling system that Linux uses. Atol’s point-and-click navigation gotme familiar with the Linux file system layout.

Atol is a Norton Commander clone, meaning it mimics the architectureof the Norton Commander interface. If you are not familiar with NortonCommander, then this explanation will not help you see the value ofAtol. However, if you used and loved Norton Commander in a previouscomputing life, then you recognize the inherent usefulness of Atolalready.

Other file management tasks are built into the menuing system in Atol.Just click on a menu category on the top row and select the desiredfunction. This makes it easy to execute file searches, browsebookmarks and filter file lists.

File splitting and file merging tasks are a snap with Atol. So arefile encryption and decryption operations. Atol uses strong blowfishalgorithm. These features are available from the Advanced drop -downmenu.

Atol also handles file hash calculation for crc32, md5 and sha1.Viewing files is just as easy; highlight a file and select the Viewoption in the File menu, or press the Fn3 key.

Atol opens the file in view-only mode with a menu option within theviewer to edit the file in a chosen application. Atol has text, binand hex modes. A quicker route is to highlight the file and select theEdit or Fn4 option in the File menu.

It is not uncommon to see programs that are several years old stillpopulating packages management systems for various Linux distros. Inthe Windows world, such aging wares are a sign of software that isgrowing out of date. Not so with Linux.

The latest release of Atol is Dec. 25, 2006, as version 0.7.3, and isdesignated as a stable release for bug fixes. It is released under theBSD License.

Atol was developed by Miroslav Rajcic, the same programmer whodeveloped Note Case Manager. Having both of theseapps installed gives me a reliable set of tools for managing myfiles and my notes database.

Dual-pane file managers provide a handy solution to aconstant computing chore. I swap files among the various laptop anddesktop computers I use via a thumb drive, and I track projects via adetailed folder system. Moving files from one folder to another isessential.

I sometimes open a standard single-pane file manager app twice anddrag and drop these files from one directory to another. However, that addsmore steps. The chore is more conveniently handled with a twin-panel solutionsuch as Atol. I can eliminate the drag and drop activity. Instead, Imerely highlight the targeted files and Atol moves or copies them witha single click of an icon in the tool bar.

With all of my files anchored to a large-capacity USB drive, I alwaysneed to synchronize directories between the thumb drive and the harddrives of my various computers. I distrust software that performsautomatic synchronization because, well, stuff happens.

I much prefer to maintain hands-on control to ensure that my files gowhere I intend them to be. Atol gives me that layer of conveniencewith its Compare directories option in the Advanced menu.

Equally quick is the manual approach. I navigate to the sending andreceiving directories so each one is visible in the twin panels. Afterhighlighting the files in one panel that I want to copy or move, Iclick on the copy or move icon sitting in the tool bar at the top ofthe Atol window. It could not get any easier.

Linux apps do not typically offer function key support within menus.Atol does. Perhaps the port to the Windows world made includingfunction keys a logical option. For me, being able to press a functionkey to bypass the drop down menu is another bonus in using Atol.

A related shortcut is pressing the underscored first letter ofcommand. For instance, with the menu visible, pressing the M keycarries out the Move command.

The File menu includes expected file management tasks such as Copy,Move, Make Directory, Delete and Rename. It also has Pack and Unpackfiles in addition to options for creating files, viewing and editingfiles.

The key to effective computing is time management efficiency. Atolgoes a long way toward making short work of file management tasks.It is easy to use as well.