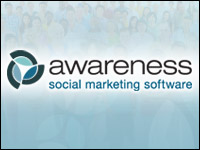 Awareness has enhanced its social marketing automation suite, Social Marketing Hub, with a new feature called “social scoring.” The feature allows marketers and brands to identify, store and rank prospects across all the major social networks based on scoring criteria they define. 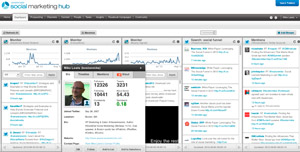 It is a deliberate change from the fluffy metrics typically associated with social marketing — such as “Likes,” fan pages and comments — which are impossible to tie to bottom-line results, the company said. Instead, users score social engagements based on their own business rules.

Hub had been on the market for two years before the company introduced the new scoring feature, explained Mike Lewis, VP of sales and marketing at Awareness.

“The original iteration was designed to a Software as a Service tool that allowed brands to connect all social destinations in one place,” he noted. “Pretty quickly, though, we found that while they liked managing the content, they also wanted to see ROI.”

Writing Your Own Scorecard

Hub was enhanced to pull social profile data and score or rate a prospect based solely on engagement. Now, with this new feature — which has been generally available for about two weeks — users can take advantage of a slew of criteria to rank a contact.

“The user can go through all of the profiles he or she has collected in a database and apply rules and weights to individual profiles based on certain criteria,” Lewis said.

“For example, a marketing company might be interested in sales reps that have tweeted about marketing applications in the past two weeks and have more than 1,000 followers on Twitter,” he suggested. “The end result is a list of people tiered according to your criteria.”

The database from which that list is culled is constructed via the Hub’s social listening tools, which can be configured by keyword or action.

This functionality is particularly advanced compared to similar tools on the market, Paul Gillin, author of The New Influencers and Social Marketing to the Business Customer, told CRM Buyer.

“There are a lot of tools that listen for conversations in various online communities and some of them give you a sentiment analysis as well. But what Awareness is doing is allowing the user to filter the conversations based on criteria set by the user.”

It is akin to Klout in that it ranks prospects based on their importance, he said.

However, Klout’s particular model leaves something to be desired, according to Gillin.

“I don’t think influence can be boiled down to a single number,” he argued. “Awareness, though, recognizes that influence is situational, and the Hub allows you to define influence as you see fit.”

This last feature also helps Awareness stand out in the marketplace, Gillin said. 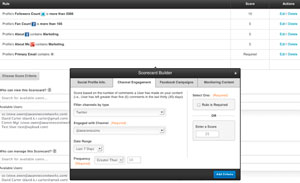 “I haven’t seen many applications that have the ability to scrape automatically from across different social profiles as this does,” he pointed out.

Comparable functionality tends to be manual, said Gillin, and requires some checking to make sure that the profile is the correct match with the actual prospect — and not someone who has a same or similar name, for instance.

“Awareness, though, has been able to apply some intelligence to the process,” he remarked.

There are other features under the Hub’s hood, noted Lewis. “We have a complete engagement engine, a full reporting engine, the ability to run a Facebook campaign, full comment moderation and integration with Salesforce.com.”

Seeing Social Meet in the Middle