BackCountry Nav Is a Good – but Not Sufficient – Guide

BackCountry Navigator Pro GPS, an app from CritterMap Software, is available for US$9.99 at Google Play.With ubiquitous Google Maps installed as standard on smartphone OS market leader Android’sdevices, why anyone would need anything else? 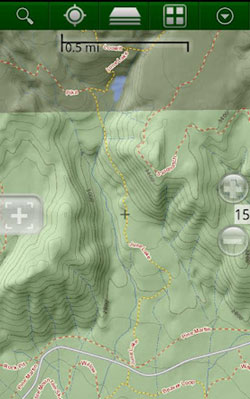 Well, the principal benefit of an app like BackCountry Navigator Pro GPS andcompetitor Gaia GPS, is that they provide offline access to topographic maps.

If you couple topo mapping with an Android device’s GPS, you have a handy navigationtool. If you add map download functionality, you have an offline device that can operatewhere there’s no mobile coverage. Air-safe mode saves batteries too.

It’s not all roses, though. Ask your friendly mountain rescue team. As they willattest with their search and rescue figures, the big problem is the limited batterylife of the devices.

App users would be wise to learn how to use and carry a traditional map and compassthat doesn’t require power. I rarely carry a hard copy, but I carry juicy extra batteries, and I’ve written about that before.

Once you’ve bought the app for US$9.99 at the Google Play store, BackCountry NavigatorPro GPS uses publicly available maps that you can download or preview when online.

The whole package takes advantage of the fact that most Android devices — but not all — don’t need an online connection to operate GPS functions.

Beautifully shaded AccuTerra maps are available as an optional add-on for $20. If you’refamiliar with Magellan GPS devices, it’s the same map.

Other paid maps include U.S. TrailMaps at $15.99, various U.S. Bureau ofLand Management maps, and others. I’ve found the free, included open sourceOpenCycleMaps great for all kinds of trials across Europe and the U.S. — includinghiking.

My introduction to Android app mapping was on a 100-mile or so, three day no-cell service drive across the hot and gnarly California desert a few years ago. My buddyand I were exploring the beaten-up, and sometimes barely visible four-wheeling MojaveTrail, an ancient wagon train route from the East into California.

Then, I was looking for the ability to download hundreds of square miles of offlinetopo maps and import Web-researched trail coordinates. I chose Gaia GPS fromTrailBehind ($2.99 in Google Play) over BackCountry because Gaia allows for a 30,000tile download.

That easily covered a hundred miles of trail.

Backcountry Navigator Pro requires that you download those kinds of vast areas inbatches of tiles, which is time consuming and prone to error. Both Gaia and BackCountryare subject to server freezes though, where downloads inexplicably stop. I’ve found thisissue on multiple devices.

The Gaia 30,000 tile count comes in at about three-quarters of a gigabyte, which leads me to the problem with Gaia — storage selection options.

Gaia logically tags specific maps that you’ve downloaded and stores them, labeled in adownload area. Thus you can delete redundancies easily and can also see what you’vegot.

BackCountry doesn’t do this. It just collects tiles, and it has a convoluted half-bakedsolution for seeing what you’ve got. You need to go offline and zoom into various partsof the world to see what shows up.

I end up deleting everything using a file browser and starting again each time — again, atime-consuming performance.

As long as you don’t push BackCountry Navigator Pro beyond its download limits, it’sa good app. Self-created open source Mobile Atlas Creator maps can be imported, andmaking one of those could be a fun project.

Backcountry has more map source options than Gaia, and that may substantiate theconsiderable price difference. BackCountry isn’t without its foibles though.