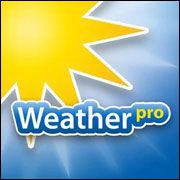 WeatherPro by MeteoGroup is available for US$2.99 in the Google Play store. I recently took a look at MeteoEarth, a rather spectacular Google Earth-like animated weather app. This visual, 3D globe-spinning weather app for Android provides zoom-in weather visualizations of the kind seen on television — and indeed, the publisher is a provider of weather-in-motion graphics to broadcasters.

Well, MeteoEarth’s visually stimulating show-off app, available only for Android 4.0.3 and above, has an all-rounder cousin, WeatherPro. 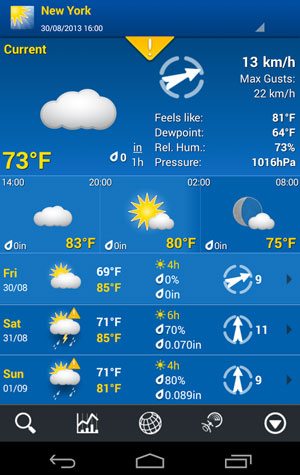 WeatherPro is a more classically designed weather app, geared toward more mundane daily forecasting use. Having said that, it’s no casual hack, and it has some impressive features of its own.

I had an opportunity to test the app while on a recent hiking expedition, back in the old country, to element-exposed Dartmoor in southwestern England.

The medieval-looking moorland is a wind-swept, partially boggy scrub capped by granite hilltops. You may have glimpsed it in Sir Arthur Conan Doyle’s The Hound of the Baskervilles.

Various mythical characters supposedly wander the fog-infested, desolate, ancient stone circle-studded bracken, including a headless horseman. The devil supposedly showed up in one of the isolated villages during a thunderstorm a few centuries ago. Doyle’s dog is probably still out there on the barren moor, guarding a few farmers’ daughters’ souls from evil weekender country-house owners.

All-in-all, it was a perfect spot to test a weather app.

MeteoGroup is a Europe-based independent forecaster. However, the forecaster covers global weather too, including the U.S., and has in fact just released an update that includes Australian radar maps.

I have found that this global nature of the app is one of its principal advantages, because it mashes European, American and worldwide radar and satellite images into one image — unlike other, more territorial apps.

The high-resolution global satellite and radar allows you to see big-picture weather patterns — across Europe, for example, rather than just countrywide, as is more common.

On one dry day, stumbling around the gorse, I was able to see swaths of cloud streaming upward from Spain and the Mediterranean over the Swiss Alps, obliterating Belgium and flowing into the North Sea — sucking moisture away from my location in darkest Dartmoor.

I was in a drafty, barren corner of ocean-exposed southern England — an area known for its rapidly changing weather. WeatherPro’s hourly forecast came through, though. On one important hiking morning, at breakfast, the app prophesied rain starting between 3:00 p.m. and 4:00 p.m., local. The first drops started at 3:10 p.m. as I tromped back to the room. Enough said.

More features include global swimming water temperatures, including the Caribbean and U.S. Gulf Coast. This is feature I wish I’d had access to on a recent dive trip to Egypt.

Ultra-violet, or UV; lightning for some countries; an air pressure map; linear temperature graphs; and a 14-day forecast with the Premium version are some of the additional features.

Things went awry when I loaded the WeatherPro phone version onto a tablet. A bizarre date and time formatting issue manifested itself, where the time on one part of the screen display mismatched the day on another.

Consequently I splashed out and bought the WeatherPro HD tablet-specific version (another $3.99 in the Google Play store), which fixed things. However, multiple weather elements that are included in the phone version appear to be missing in the HD version, including an important rain overlay graphic. Watch out for that. 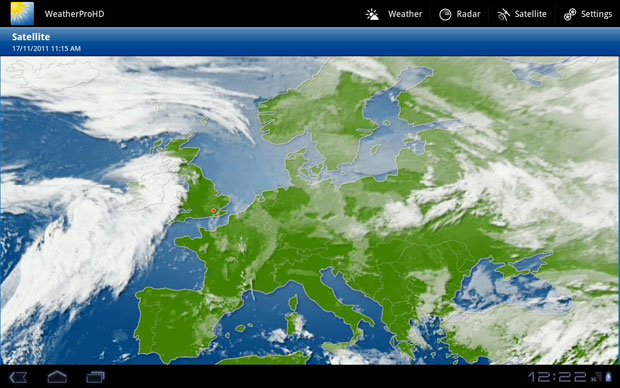 That brings me to my one gripe with the whole package: This is an expensive proposition. If you buy WeatherPro, apparently required WeatherPro HD, and the one-year Premium in-app add-on, you’re in for 12 bucks.

Add MeteoEarth for the wonderful 3D globe with its animated rain-fronts and other effects at $3.99, and it’s crept up to a $16 investment.

You decide — I stayed dry that day on the moors. So it was worth it for me.