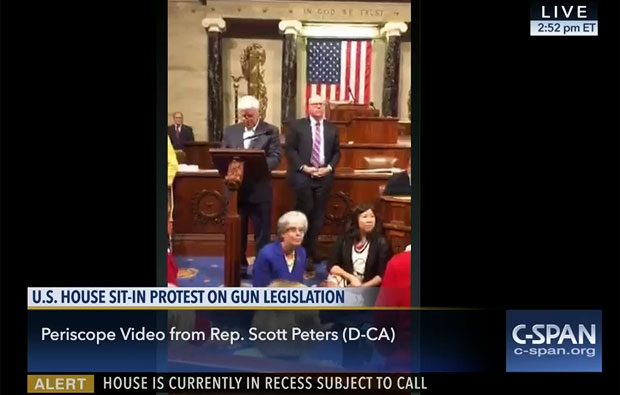 C-SPAN cameras in the U.S. House of Representatives were shut off Wednesday morning during a sit-in over gun control legislation, but the cable network soon began broadcasting social media streams from legislators taking part in the event.

House Democrats, led by Rep. John Lewis, D-Ga., had refused to stop their protest, which demanded a vote on gun control following last week’s terrorist shooting at an LGBT nightclub in Orlando, Florida.

C-SPAN, or the Cable-Satellite Public Affairs Network, launched in March 1979 to cover proceedings of the United States federal government. However, the network never has had full control over the cameras in the chambers.

After Rep. Ted Poe, R-Texas, who was presiding over the chamber, declared the house in recess, C-SPAN went dark. It then opted to utilize the Periscope feed of Rep. Scott Peters, D-Calif., which had been streaming the protest. Later C-SPAN began using Facebook video feeds as well.

Speaker of the House Paul Ryan, R-Wisc. reportedly described the streaming of the sit-in as little more than a publicity stunt, and further noted that because the chamber was in recess the live camera feed had to shut off, per House rules.

Those camera rules are unlikely to change anytime soon, either. At the start of each new Congress — every two years — there is a vote on such procedural rules, and legislators for the past three decades have voted that when the House is not in session, the cameras stay off.

C-SPAN has tried to get its own cameras into the chambers since 1984, but the parties in power at any given time — whether Democratic or Republican — have managed to maintain control over not just the cameras, but also the audio, the camera directions and the angles.

Both sides have opted to go dark when it suited them.

In August 2008, for example, when the Democrats were in control, with Rep. Nancy Pelosi, D-Calif., as its Speaker, the House was declared in recess for its five-week summer vacation while GOP lawmakers remained on the floor and gave speeches.

At that time the C-SPAN feed went dark. Now, however, mobile apps give those staging such protests a new platform.

“The use of Periscope to broadcast the Democratic sit-in was a creative use of technology to circumvent a political problem,” said Josh Crandall, principal analyst at Netpop Research.

“Politicians will use whatever means is necessary to get their message out, whether it’s a Sunday TV news program, social media or an online broadcast,” he told the E-Commerce Times. “The lines between traditional and online media continue to blur, and the result is a fluid exchange of anytime, anywhere coverage of the world around us.”

When C-SPAN launched, it provided a live look into the workings of government, but this latest publicity event has showcased that the party out of power can bypass traditional rules and protocols.

“These tools are clearly helpful to circumvent attempts to control coverage or messaging from the government, so they represent technologies that groups can use to get their messages out to a broader public,” noted Greg Sterling, vice president of strategy and insight at the Local Search Association.

“Recall that cellphone video resulted in the police brutality debate all this year,” he told the E-Commerce Times.

“Now that it’s possible to capture almost any moment around us, the seat of power continues to shift into the hands of the editors and influencers who curate media and drive consumption,” added Sterling.

Does this truly result in a more open and transparent government?

“Nothing would please me more than to see some honesty and transparency broadcasted from Washington,” said Lon S. Safko, a social media consultant.

“I like the idea of having unbiased feeds that are live from both sides of the aisle,” he told the E-Commerce Times. “Too many media outlets are so biased that the news becomes worthless; if it’s a live feed, then it is what it is: unedited, and I can draw my own conclusions.”

The Bad With the Good

In practical terms, streaming media from the floor gives the opposition party in Congress the power to keep sharing the message after the plug is pulled. In that regard, it is possible that social media could result in more communication and transparency, noted Sterling.

“Having said that, social media outlets often result in preaching to the converted,” he emphasized.

“The more fragmented media landscape has created self-identified silos and echo chambers that reinforce existing beliefs and values — and in that sense, the Internet and social media have contributed to greater polarization in society,” Sterling said.

“I am totally not for any kind of censorship at all, but sometimes it’s best that we just don’t see how the sausage is made,” remarked Safko. “C-SPAN does a pretty good job, and they should remain the only broadcasting media. There’s already plenty of opportunity for each politician to flood their own social channels with whatever fodder they wish.”