Capitalizing on the Retrofit Market

With all indicators of new home construction being so bearish these days (and unlikely to improve significantly anytime soon), there’s been a great deal of speculation that remodeling market opportunities are emerging as a better market play for custom installing dealers/installers — at least in the short- and medium-term — than new construction. We’d agree with that “common-sensical” assessment of relative market opportunities, but don’t yet have any objective and definitive evidence that documents the fact.

Unlike the new construction market — which is covered like a blanket by a wide variety of Commerce Department monthly surveys, the National Association of Home Builders, private market research firms, etc. — data on activity in the residential remodeling/retrofit market is hard to come by (information on retrofit/renovation spending for nonresidential buildings is scarcer still). This is true even for data on common home remodeling jobs — kitchens, bathrooms, etc. — to say nothing of below-the-radar emerging markets like home A/V and controls.

Consequently, what little we know about the levels and trends in remodeling spending involving home electronics has to come from the installer/dealer community itself. EH Research has on a few occasions asked installing dealers about the relative share of their work that comes from new construction and the share that comes from remodeling/retrofit work on existing buildings.

Although there’s always been a great deal of variance in what individual firms report (some nearly 100 percent new construction, others with the overwhelming majority of work coming from retrofit) — as is typical of any survey of a broad cross-section of installing dealers in different parts of the country and with different areas of product expertise — the most recent numbers do show evidence of gently trending away from new construction. To be sure, the broad averages still tend to cluster at about “50/50,” but remodeling/retrofit does appear to be accounting for a marginally larger share of revenue today for the “typical” installing dealer than has been the case over the past several years.

When EH Research did its first two surveys of custom electronics installing dealers back in 2003 and 2004, responding firms reported that approximately 53 to 55 percent of their revenue came from new construction and the remainder from remodeling/retrofit work. During 2006, the same question elicited an average response break of 52.6 percent new and 47.4 percent retrofit.

The most recent survey of the installing dealer subscribers to CE Pro magazine, however, shows what we believe is a slowly developing trend. During the 2006 annual survey of CE Pro subscribers, installing/dealer firms reported that 52 percent of their revenue came from new construction and 48 percent from remodeling/retrofit work. 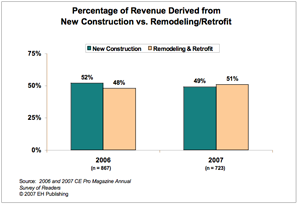 During the just-completed 2007 survey of these same readers, though, the relative shares had shifted (although they remained in rough balance, by any objective assessment): firms now report that 49 percent of their revenue is coming from new construction, while a plurality of 51 percent is derived from residential remodeling/retrofit work.

That’s not exactly a sea of change in the market focus of the custom electronics installing community, but we would deem the over-the-year movement to be of significance. For now, though, it represents just a couple of data points in time. However, the observed trend is supported by anecdotal evidence, and by the sense that new construction opportunities are more limited now than over the past several years, even as home electronics is being installed in a greater percentage of the dwindling volume of new homes being constructed.

The soft new-home market is clearly an influence driving some integrators to remodeling/retrofit projects, but there are two other factors that, in combination, could spark a substantial rise in this segment of the market.

Second, power line and wireless technologies are becoming both more affordable and capable alternatives to traditional wired solutions and are natural fits for this market.

Therefore, we recommend that manufacturers and service providers channel some resources to develop solutions for the remodeling/retrofit market to capitalize on this enormous opportunity.