Devs Get to Noodle With Android N

The release came early; it was widely expected to be unveiled in May at Google I/O 2016, the Google developers conference.

Releasing a work-in-progress build earlier in the development cycle will give Google more time to incorporate feedback from developers and will let it hand off the final release to device makers in the summer, the company said.

An issue with Android is the long interval before the latest version gets into consumers’ hands. Android Lollipop, released 16 months ago, this month finally overtook the previous version, KitKat, in number of installations, Google’sfigures show.

Multiwindow support will let users display more than one app simultaneously. It will let handheld devices run two apps side by side or one above the other in split-screen mode, allowing users to view a Web page on one side and compose an email on the other, for example. 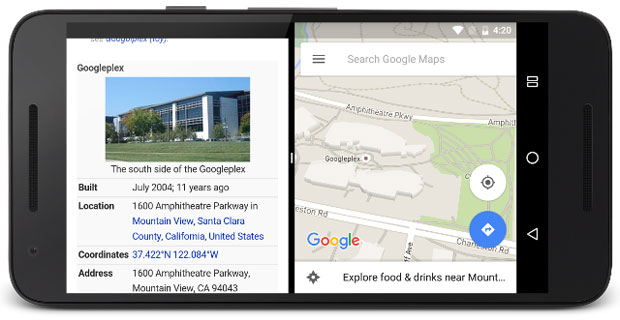 On TVs, apps will be able to use picture-in-picture mode to continue video playback while users are interacting with another app.

Others features include the extension of Marshmallow’s Doze to save battery power whenever the screen turns off, improved Java 8 language support and direct reply.

Android N will be available as an over-the-air update when devssign up.

Multiwindow “is a crucial feature for any serious contender in the two-in-one market,” said Eric Smith, a senior analyst atStrategy Analytics. “Apple brought it to iOS9 for newer iPads, and Windows two-in-ones are selling like hotcakes.”

Windows this year will have 53 percent of the worldwide detachable tablet market and Android 18 percent, IDC projects. Worldwide shipments of slate tablets have been declining.

“Android’s behind the others there,” remarked David MacQueen, an executive director of research at Strategy Analytics. Multiwindow “will be the most obvious and, I think, useful change.”

However, the resizing “could easily cause some problems for developers, who will have to think about how their UI and look and feel will change,” he told LinuxInsider.

Bundled notifications will offer users “a minor quality-of-life improvement,” MacQueen said. Multiple notifications are “just like another form of spam.”

As for direct reply, the feature “makes a big difference for ease of use so users aren’t forced to go to each app to respond to messages,” Smith pointed out.

Google may be offering the N preview as an OTA update because “there are rumors [it] wants to better control the update procedure,” he suggested, but “whether this ability stays in the general release is up for debate.”

The Rush to Early Release

“That it takes a year and a half for a release to achieve majority penetration is something Google is focused on changing, as it lowers the overall user and developer experience,” he added.

The fragmentation of the Android ecosystem and delays by carriers in pushing out updates are behind the slow adoption of new releases of Android. That likely won’t be any different for Android N.

“I don’t expect usage to be above 10 percent a year after it’s released,” Strategy Analytics’ Smith predicted.

Most consumers probably “won’t see these upgrades for another two years because of the ecosystem fragmentation,” he told LinuxInsider. “The best case scenario is that two-in-one tablet vendors use this to bring productivity to Android devices in a very low-cost way for the 2016 holiday season.”