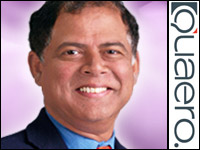 It may seem that CSG Systems, a provider ofcustomer interaction and billing management software, acquired marketingcompany Quaero in the nick of time. The deal was announced at the end of theyear — just as it was becoming painfully clear that the recession was likely to be much deeper than initially feared.

The timing was fortunate for Quaero, acknowledged founder Naras Eechambadi. “Being part of a large company certainly has its privileges,” he told CRM Buyer. Still, with its mix of outsourced marketing services and Web analytics expertise, Quaero already was carving out a niche of its own.

CRM Buyer: How is Quaero weathering the economic downturn?

As well as can be expected. We were very fortunate in that our acquisition by CSG happened late last year just as the economy was starting to slow. Last October, when all hell was breaking loose, was our best month — it was odd. But we eventually did see a slowdown in our business.

One reason that CSG bought us was that they wanted to develop new offerings around client intelligence in the cable and DBS (direct broadcast satellite)industries — we have been able to redeploy our people to develop and design some of these products.

We tightened our belts in a variety of ways. The first thing we did in January when we realized we would be hit hard was to stop all recruitingactivities. We had been recruiting up until then. And as people left, wedidn’t replace them. We also placed heavy restriction on travel unless itwas related to delivery for clients or business development purposes. Andwe reset our people’s expectations in things like bonus and raises. It’sbeen a variety of small things.

CRM Buyer: How can your products help your customers’ bottom lines in thenear term?

One of the services we offer has to do with clients outsourcing the management of their marketing infrastructure to us. So for some, we host their customer database — such as BI applications or campaign managementapplications, data feeds — and then allow them to run the campaigns throughour portal. That can cut costs for them because we are specialists in this business and it can help them run a more efficient business. We can also dothe execution and measure activity on the back end.

We also can look at the processes a client already has and make suggestionsfor how those processes can be more efficient — how a company can run more campaigns with the same number of people, for example. Typically, our recommendations involve a combo of improved processes and technologies andupgrading the skill sets of employees. Sometimes, it may mean more investmentupfront, but in the end it will result in a significant cost or time savings.

CRM Buyer: What are some of the bright spots for your company right now?

The outsourcing trend is one. People have been outsourcing IT for a long time, but they have been less willing to outsource things like marketingcampaign management. We have been able to convince companies to outsourcethis to free up their resources. It makes sense for a lot of companies –operational efficiencies are not a strength in most marketing organizations.

The outsourcing trend — our hosted business and the way we are acting as a marketing outsource execution company — now it is 40 percent, but I think it’ll between 50 percent and 60 percent. That will be huge for us.Outsourcing and hosted clients tend to be long-term clients, which is verystable for us.

CRM Buyer: Just curious — but October was a dreadful month for everybody.How did you do so well?

We had been working on several fairly large-sized deals for many months — it just so happened they all finalized in October. They were a couple of million-dollar-plus deals. It was a happy coincidence.

CRM Buyer: What are some current market trends — besides the recession –that will benefit your firm?

Web analytics. This has been a growth area, but companies have had a hard time getting a handle on it. Most of our clients have a Web analytics provider that provides their raw data — but on a rudimentary dashboard orsomething similar, which is not always helpful.

We organize the data and distill it down to what is essential to thecustomer — what insight it needs — and then combine with offline data.

CRM Buyer: You talked about marketing efficiencies — can you elaborate more on that?

There are a lot of examples, starting with basic data cleanup.Sometimes just doing that well can reduce the amount of mail or email sentout by 10 to 15 percent, which is a huge cost savings. Also, just beingsmarter about how you are communicating — using analytics to keep track ofwho responds to what messages — and just being more careful about what youroutbound message is.