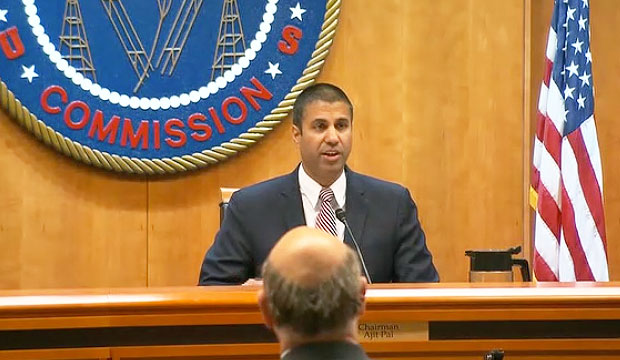 The repeal would restore light touch oversight and open the doors for ISPs and other businesses to give consumers more choice and offer new technologies in a way that has flourished for more than two decades, Pai said in remarks prior to the vote.

“It is not the job of the government to pick winners and losers,” he told attendees at the meeting.

Chairman Ajit Pai’s presentation was interrupted briefly when the meeting room was cleared on the advice of security officials, who brought in a canine team to search the area.

The FCC’s Wigfield declined to elaborate on what, specifically, prompted the measures.

FTC to Take Over

The reversal of the Title II framework means that broadband Internet service once again will be regulated as an information service rather than as a utility.

The vote also means that the Federal Trade Commission will take the lead in regulating broadband Internet and will be responsible for investigating complaints of unfair, deceptive or anticompetitive business practices.

The new rules will take effect after final clearance by the Office of Management and Budget, which could take months, according to FCC spokesperson Mark Wigfield.

The move to repeal the rules was hotly contested by numerous consumer advocates, Silicon Valley companies, and others who feared the so-called light touch oversight would allow major broadband and telecom providers to limit access to some content providers and potentially force consumers to pay higher fees for faster speeds.

The FTC is “ready to resume its role as the cop on the broadband beat,” said Maureen Ohlhausen, acting chairman of the commission.

Broadband providers will be required to disclose their traffic management practices, she noted.

The state AGs had requested that the FCC postpone the vote, pending their investigation into charges that as many as 2 million citizen comments regarding the issue were created fraudulently, but the commission rejected that appeal.

The 2 million suspicious comments appeared to be associated with stolen identities, Schneiderman said.

The FCC has given an “early Christmas gift to big telecom companies,” he commented following the vote.

The new rule will let ISPs charge more for access to social media companies, Schneiderman added, and favor certain viewpoints over others.

Netflix was among the companies that opposed repeal of the rules.

We’re disappointed in the decision to gut #NetNeutrality protections that ushered in an unprecedented era of innovation, creativity & civic engagement. This is the beginning of a longer legal battle. Netflix stands w/ innovators, large & small, to oppose this misguided FCC order.

The vote was a “historic mistake,” said Sen. Ed Markey, D-Mass., as he and 15 cosponsors introduced the Congressional Review Act to the U.S. Senate. The resolution would roll back Thursday’s repeal and restore the 2015 Net neutrality rules with a simple majority vote in the U.S. House and Senate.

It will “work against the over the top services,” he told the E-Commerce Times, “unless they’re big enough, like Netflix, to demand a seat at the table.”

Users likely will have to pay more, on average, Kay said, adding that “vanilla service will be crappy.”

There is a valid argument to be made for the rules repeal, suggested independent analyst Jeff Kagan.

“We have to remember if you want companies to make investments in the Internet infrastructure to bring high speed [access] to Americans, they must be profitable,” he told the E-Commerce Times. “Trying to get companies to bring Internet to America with little or no profitability is a nonstarter.”

Although Thursday’s vote to repeal Net neutrality will please broadband providers and displease consumers and companies that use the Internet, he said, it won’t end the debate.