I thought I had found image-manipulating Nirvana with GimpShop. But the wide world of open source software and the Linux community failed me this week. My quest for a better GIMP tool to give me a Photoshop-like Windows experience (as in Adobe’s Photoshop) turned into a fool’s folly. 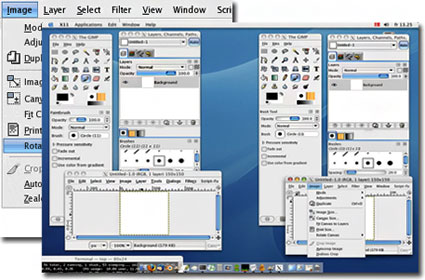 Actually, my faith in the Linux OS is still intact. But my disappointment in not finding salvation from resorting to a return to Microsoft Windows caused me to question my decision years ago to convert to Linuxism.

All of this stemmed from a two-part need. One aspect was my weekly quest for software to review for this column. The other driving factor was my desire to produce graphics for a project consuming too much of my time without retreating to that other operating system.

I usually set aside badly performing open source products when I test them rather than waste readers’ time with negative reviews. But my experience this week laid bare a larger issue. As great as the concept of Free Open Source Software (FOSS) is, not every Linux software package serves the greater good.

Linux users have an impressive cache of photo editing tools available. Some of them received favorable reviews in the annals of Linux Picks and Pans — for example, Shotwell, FSpot and GIMP. But few programs tooled for the Linux environment offer the professional-strength options of high-end commercial photo manipulation software.

Perhaps the gold standard bearer in that category is Photoshop. Alas, it is very costly and not available in a free Linux version. For those with a Windows version of the app, getting Photoshop to run suitably, if at all, under WINE in Linux is frustrating at best.

You can also run Photoshop on a Linux computer running a virtual box containing a Windows operating system. But that option just presents another layer of workarounds. It also is not an available option if you do not already have the very expensive Windows OS as well as the Photoshop software.

So one of the few Linux options for high-end photo manipulation software is GIMP, which runs on a variety of operating systems. GIMP is Linux Speak for GNU Image Manipulation Program. It is a free powerhouse that sets the Linux standard for displaying and tweaking all things photographic on a computer screen. It is a very close first cousin to Photoshop.

GimpShop modifies the GIMP user interface. It is a clone-like remix of GIMP to make the menus and functionality almost one with the Photoshop experience. GIMP has similar capabilities as Photoshop. But it is sometimes more awkward to use and misses a few of the core features available in Photoshop.

Of course, if you never used Photoshop, you simply struggle to learn the user-unfriendliness of GIMP. Settling for second best is not a real problem for typical users. But finessing unorthodox characteristics in GIMP is not such a bad idea.

Clearly, that was GimpShop creator Scott Moschella’s intent. As he explains in his blog, he renamed and reorganized GIMP’s tool sets, options, windows and menus so they closely resemble Adobe Photoshop’s menu structure and naming conventions. Many of the menu options and even whole menus were recreated to faithfully reproduce a Photoshop-like experience.

Indeed, after running Moschella’s GimpShop hack, Photoshop and GIMP are strikingly similar. But therein lies the problem — running the hack.

I have grown used to GIMP’s quirkiness. I learned proficiency in navigating my way through its disjointed three unattached panels. But I still have to think out the correct combination of drop-down menu options and right-click access that works to supplement the menus.

Having a more intuitive interface was the attraction that drew me to the GimpShop promise. But I found it was a failed promise. It seems that the Linux architecture and GIMP itself have moved on. GimpShop was left behind with version 2.2.11.

But some hope for an updated version of GimpShop may still exist. The developer’s website refers to a new Version 2.6.11. That version already exists for the Windows and the Mac OS X platforms. But the Debian Linux download only produces the older 2.2.11 version. And that older iteration does not run.

At first I thought I erred in installing GimpShop. But I had the same failure in attempting to install the Debian package on Linux Mint 12 and Ubuntu 11.10.

Then I hit the technical forums to sniff out a tale of similar woes of failed installations. The only available Linux version was based on an older GIMP version. It does not work with the latest GIMP code base. So GimpShop is useless.

Perhaps the situation with GimpShop is indicative of a larger scenario with forks in the Linux roadway. This is just a case of software incompatibility caused by one open source project not keeping pace with its host software.

The newer version of GimpShop is already ported to the Windows and MAC OS X platforms. So maybe the developers will catch up with the newer Linux version soon. The larger question is, does anybody care?

Do Linux users need what is essentially a clone of a clone to mimic a non-existent Linux Photoshop app? If Moschella could tweak a more user-friendly interface into GIMP, why does the GIMP development community not do the same thing? Why not give GIMP users a choice of which interface to use?

The concept behind GimpShop is a worthy one. But the longer it takes the developer to release a working version of the GIMP hack, the more unnecessary the GIMP clone will become.

Software — and, for that matter, OS — forks result from a failure of developers to share the same goals. I would prefer to have a truce produce an optional set of GimpShop plugins to work with the current version of the photo manipulation package.

I discovered a similar failure to launch with another GIMP clone product, GIMPhoto. This further underscores the need for fixing the fork in the Linux GIMP roadway.