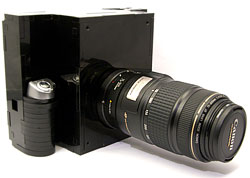 There’s a pieced-together monster shaking up the campus of Stanford University this fall, and it’s named after the legendary, lumbering creature that Halloween nightmares are made of.

Rather than parts of human corpses, however, this monster was cobbled together from a Texas Instruments system on a chip, off-the-shelf Canon lenses, an imaging chip from a Nokia N95 phone and — most important of all — Linux.

Forget that green, square-headed abomination from horror stories and the silver screen — this is the Frankencamera, and it’s here to change the way digital photography is done.

Developed by a team of Stanford scientists, the Frankencamera is an open source camera that could change photography by giving users the power to manipulate its features and capabilities in ways that might not yet have even been imagined.

Digital cameras are traditionally limited by the software that comes preinstalled with them, but virtually all features in the Frankencamera — focus, exposure, shutter speed, flash and more — are open to modification.

Until recently, for example, computer manipulation was the only way to perform what’s known as “high-dynamic-range imaging” — capturing multiple pictures of the same scene with different exposures and then combining them into a composite image in which every pixel is optimally lit.

Today, however, the Frankencamera can do that right at the scene, on demand.

Users of the camera have the freedom to experiment with other ways of tuning its responses to light and motion as well, adding their own algorithms to process the raw images in innovative ways.

“Some cameras have software development kits that let you hook up a camera with a USB cable and tell it to set the exposure to this, the shutter speed to that, and take a picture, but that’s not what we’re talking about,” said Marc Levoy, the Stanford professor of computer science who leads the Frankencamera project.

“What we’re talking about is, tell it what to do on the next microsecond in a metering algorithm or an autofocusing algorithm, or fire the flash, focus a little differently and then fire the flash again — things you can’t program a commercial camera to do,” he explained.

The Linux distribution used is “the one that comes with TI’s evaluation board for the OMAP3530 processor,” Andrew Adams, a graduate student in computer science, told LinuxInsider. “It’s a fairly standard embedded Linux using BusyBox.”

The Frankencamera team is considering switching to the Maemo distribution from Nokia, Adams added, “so that our software can also run on their Internet tablets — the newest one includes a decent camera.”

So far, most of the project’s code is in the form of a modified kernel driver for the device’s image sensor — the Aptina MT9P031 — “to give us finer-grain control over the sensor than the video4linux API normally allows, and a few user-space apps to do camera-like things,” he explained.

The camera’s software will be released with source code when it’s ready, Levoy told LinuxInsider — probably in about a year, he said.

It won’t be just the Frankencamera’s software that will be open, however: the design and construction of the camera itself will also be entirely open, Adams said.

“We’re trying to make the entire body out of laser-cut acrylic of a single thickness, and release all the schematics, so that anyone with access to a laser-cutter can buy the same components and make their own Frankencamera,” he explained. “It’s very easy to modify the design for your own purposes in this way, and we imagine no two Frankencameras made this way will be exactly alike.”

An ‘Outpouring of Desire’

The Stanford team’s original plan was that once they were happy with its design, they would find an outside manufacturer to produce the Frankencamera in quantity — ideally for less than US$1,000 each–and provide them at cost to other researchers.

Interest has been so widespread, however, that they’re already reconsidering.

“We’ve been surprised at the outpouring of desire for the camera itself,” Levoy said. “We may want to rethink our plans to limit distribution.”