If you are looking for a superior text editor, your search might just begin and end with a nifty program called “Geany.”

One of my biggest concerns when I switched from Microsoft Windows to Linux was finding an adequate replacement for my favorite text editor. For years, I used a commercial program called “TextPad,” but it was a Windows-only product, so my search began. 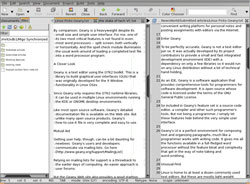 Geany is a text editor using the GTK2 toolkit with basic features of an integrated development environment.
(click image to enlarge)

I had no problem switching my word processor preference from Microsoft Word to Open Office.org’s package. That provided a nearly identical suite of programs for word processing, spreadsheets and PowerPoint-type presentations.

However, much of the writing I do does not require a full-fledged word processing program. I use the OpenOffice Writer for printed versions of my work, but the right text editor can provide a more convenient writing platform for personal notes and posting assignments with editors via the Internet.

To be perfectly accurate, Geany is not a text editor per se. It was actually developed by its project contributors to provide a small and fast integrated development environment (IDE) with a dependency on only a few libraries so it would run on any Linux distribution without a lot of technical hand-holding.

As an IDE, Geany is a software application that provides comprehensive tools for programmers for software development. It is open source; its code is licensed under the terms of the GNU General Public License.

Included in Geany’s feature set is a source code editor, a compiler, and other such programming tools. Not being a programmer, I simply let these features hide behind the very simple user interface.

Geany’s UI is a perfect environment for composing text and organizing paragraphs, in much the same way that a programmer works with writing code. It gives me all the functions available in a full-fledged word processor without the feature bloat and complexity that get in the way of note-taking and wordsmithing.

Linux is home to at least a dozen commonly used text editors, but these are mostly lightweight reincarnations that have very little in the way of distinguishing features.

Whether the intended use is writing code or composing content, programs such as Leafpad, Zedit and Medit are of little use for much more than basic note entries.

By comparison, Geany is a heavyweight, despite its small size and simple user interface. For me, one of its two most critical features is not found in even most word processors — split screen, both vertically or horizontally. And the spellcheck module eliminates the usual workaround of loading a completed text file into a word processor program.

Geany is a text editor using the GTK2 toolkit. This is a library to build graphical user interfaces (GUIs) that was originally developed for the X Window functionality in Linux OSes.

Since Geany only requires the GTK2 runtime libraries, it can be used in multiple Linux environments running the KDE or GNOME desktop environments.

Like most open source software, Geany’s detailed documentation file is available on the Web site. But unlike many open source products, Geany’s how-to-use-it file is very complete and easy to use.

Getting user help, though, can be a bit daunting for newbies. Geany’s users and developers communicate via mailing lists.

Relying on mailing lists for support is a throwback to the earlier days of computing. An easier approach is user forums.

Geany for the MacOS X is available here.

Installing Geany is usually uncomplicated. If the target Linux distribution includes the Geany package in its software distribution manager, all is good.

If not, you can get it here — but this is likely where newbies will run into some trouble.

The downloaded file is compressed. Besides uncompressing it, you may have to compile the results so it can be used by your particular Linux flavor.

Newcomers to Linux can find specific details on how to do this by checking with the users forums on the Internet for their particular Linux distribution.

Chances are, you use one of these Linux distributions. If so, you can grab Geany from the resident package management system and install it sweat-free:

Geany lets me compose text with the same efficiency that I loved in the Windows TextPad program. Many of these functions are equally suitable for those writing code.

For instance, setting the preferences option to load the list of files from the last session keeps all of my current projects on the screen every time I load Geany.

I can configure Geany to place each file in a tab, much like tabbed browsing. Placing the pointer on any tab and spinning the mouse wheel cycles through the list of open documents.

Geany also allows two sidebars to show bookmarks and a file list. Clicking on a file name lets me jump to that text file.

Maybe not so important to code writers is the word-count feature. This to me is indispensable. I can get a word count of the entire document or just the highlighted section.

A plug-in manager feature in the Tools drop-down menu provides additional features such as auto-saving files and adding a file browser tab to the sidebar.

When I used Microsoft Windows, I was happy to pay for TextPad to get all of its hard-core features beyond what the free shareware version offered. Now that I am an avowed Linux user, I am even happier to have replaced my prized Windows TextPad text editor with Linux’s Geany for free.

That is one of the real beauties about open source software. Geany comes with top-of-the-line features often not available in less accommodating Linux text editors.