Finally the barge mystery has been solved — but the answer for some is a bit deflating.

That four-story barge floating on San Francisco Bay — not to mention others in three additional cities, including Portland, Maine — has whipped tech observers into a frenzy because of its clear but uncertain link to Google.

Well, according to Google, its will be used as an interactive space where people can learn about new technology. 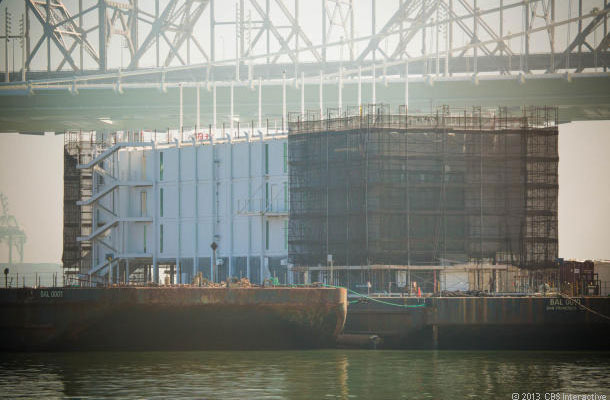 Google was not unaware of the whirlwind speculation surrounding the barges.

“Google Barge … A floating data center? A wild party boat? A barge housing the last remaining dinosaur? Sadly, none of the above,” the company began its statement that was e-mailed to the E-Commerce Times and other media outlets.

“Although it’s still early days and things may change, we’re exploring using the barge as an interactive space where people can learn about new technology.”

So ends the mystery, but in its place a new one arises: Why the mystery in the first place? Is Google that hard up for buzz? Has it lost its marketing touch? Or, conversely, are we as a society so obsessed with high-tech giants than any tiny move they make is subject for 24-7 nonstop coverage?

Dreams of an Energy-Efficient Data Center

Societal and existential musings aside, the run-up to The Answer about the barge unleashed a wave of theories that ranged from luxury event space to a floating data center that could steam out of territorial waters to avoid privacy laws and monitoring by government spooks — theories that Google specifically debunked.

The constituency gathering behind the idea that the barge was a floating data center was particular strong.

“The global race for energy-efficient data centers is on,” Guido Lang, assistant professor of computer information systems at Quinnipiac University, told the E-Commerce Times. “Facebook has invested a lot of resources and recently built what is probably the most energy-efficient data center in the world — located less than 70 miles from the Arctic Circle, in Lule, Sweden.”

It is not outside of the realm of possibilities that Google could one-up Facebook by building one or several floating data centers, he continued — in fact, the concept makes perfect sense.

“Easy access to cooling water and the potential to harvest the electrical power from waves makes floating data centers the next frontier in eco-friendly data center design,” Lang said. “After all, Google received a patent for a sea-powered data center in 2009. Which makes you wonder: Why go all the way to Sweden if you can just float your data center right out in San Francisco Bay?”

A Feint Within a Feint

For these enthusiasts, it was a letdown to learn that, as many had posited, the barges are glorified showrooms for Google’s next-gen products. Granted there is some pizazz to the concept: the barges can be equipped with the latest in Google tech and then float to various cities in a sort of traveling road show.

Yet maybe, to crib a line from a famous work of science fiction, the barges are a feint within a feint — that is, there are more surprises coming to keep this story line from flagging.

“Actually the buildup for Google’s announcement of what its mystery barge was really for was a PR masterstroke,” David Johnson, CEO of Strategic Vision, told the E-Commerce Times.

“With endless stories speculating what the barge was for, it garnered the company free publicity and sets the way for their announcement of the next breathtaking product or service that Google will offer that no doubt will be developed on the barge,” he said.

Also, the barges diverted attention from Google’s new ad policies — “sure to upset consumers,” Johnson noted — “and allowed that policy to sneak under the radar while everyone was talking about the mystery barge.”

Ubuntu’s Saucy Salamander is a Slick but Spiritless Upgrade