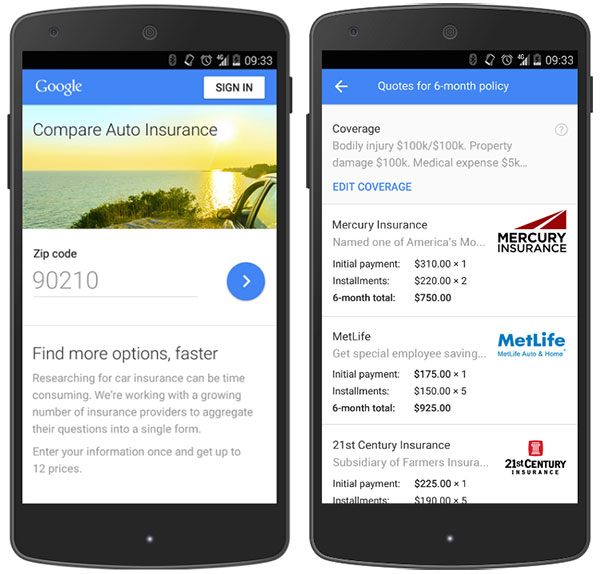 Mercury Insurance, MetLife and 21st Century Insurance are among the 14 firms already signed up as partners, and Google promises more will follow.

Bolt Solutions last week announced that it too has joined up.

“We have a Google Compare agreement with Google,” said Bolt spokesperson Chrissy Snyder.

Bolt “can provide an on-ramp for carriers that want to participate,” and act as an agency to present insurance options to consumers through Google Compare, she told the E-Commerce Times.

Consumers key in their ZIP code, name, date of birth and street address to get a quote through Google Compare.

It offers them the choice of letting it access third-party data providers to prefill answers in its questionnaire — to questions about themselves, their cars, additional registered drivers, etc. — or manually entering the information.

They can review and edit prefilled data before submitting the request.

The prefill capability raises questions about the privacy of the site’s users right off the bat. Bear in mind that Google already has scads of user data, and that it recently revised its policies to let it aggregate data about users across all of its services.

The United States Federal Trade Commission in 2011 issued an order requiring Google to, among other things, get express user consent before engaging in any new or additional user data sharing with any third party.

“Google, as we all know, is one of the biggest threats to our privacy online,” said John Simpson, a privacy advocate at Consumer Watchdog.

Any data gathered on this site must be used for insurance purposes, and Google “must not be allowed to combine this data with any other consumer information it already holds, or use it to sell ads,” he told the E-Commerce Times.

“I’m not certain any of the information entered on this page would be at all mysterious to Google,” suggested James Hood, founder and editor of ConsumerAffairs.com. “It could probably fill out the application without any input from most of us.”

On the other hand, “it’s a bit late to close that barn door,” he told the E-Commerce Times, “the stable already being empty.”

Opinions differ as to the usefulness of the Google auto rates comparison page to consumers.

It “will be very valuable to consumers, perhaps similar to the airline fare page that Google introduced a few years ago, [which] has done wonders for travelers looking for the best fares,” Hood opined.

Google “will pitch this as a service that easily allows consumers to compare policies and find the lowest prices,” Consumer Watchdog’s Simpson said.

However, the quality of its partners is key, he noted, pointing out that one, Mercury Insurance, “has a history of aggressively fighting consumer-friendly insurance regulations,” such as California’s landmark ballot initiative Proposition 103.

Another point that might be troubling is Google’s statement that its partners are backed by the California Insurance Guarantee Association .

CIGA helps consumers whose insurance companies are insolvent, and that raises the question of whether Google vets insurance company partners at all before accepting them.

Google “will have a significant impact on how consumers shop for car insurance, since [it] is already the world’s most visited website,” said Stephen Spivey, automotive and transportation program manager at Frost & Sullivan.

“If the Google search tool is the first link shown in any query for car insurance, it will keep many customers on their site instead of clicking onto another page, giving [Google] significant control over which sellers they consider,” he told the E-Commerce Times.

While that will make it easier to find the lowest-price policy, Spivey cautioned that consumers “may have to do additional research to understand the deductibles, coverage limits and exclusions that apply.”