Roam If You Want To

When you’re playing “Guitar Hero” on a mobile phone, the most important thing to bear in mind is that you’re playing it on your phone. That means, mainly, that you’re not going to get the console experience. However, Hands-On Mobile has put forth a respectable effort at replicating the experience in a portable format.

With that in mind, this game is the best I’ve seen so far on the Android platform. It’s challenging but not impossible, and the various difficulty levels allow you to grow and develop as you continue playing. 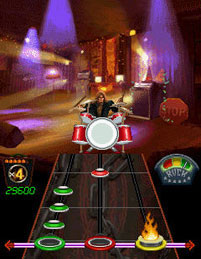 Initially, I was a bit concerned, because a good portion of the comments on the Android Market mentioned that there’s a lag in the game. I experienced a bit of lag a couple of times while playing, but it wasn’t anything that really ruined the game for me. Then again, I’m just not all that good at the game, so I did more to wreck my score than a spotty connection could ever do.

If I had to guess, the people who were complaining about a lag most likely were on EDGE networks and not 3G.

Other complaints were that the songs don’t play out to completion. While that does happen, I didn’t think it ruined the experience.

When you play on a console, of course you have a plastic guitar or imitation drum kit to ply your skills on; with the mobile version, the tiny little touchscreen interface can hamper your game a bit. I found myself — particularly when playing drums and trying to hit the kick pedal — missing the mark, even though my timing was correct. 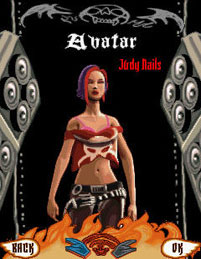 As for the look of the game, the graphics are fairly true to the original and as sharp as anything I’ve seen in an Android game. There are only two avatar choices, one male and one female. Given my druthers, I’d like to see a few more options, just for the sake of variety.

You start out with a handful of songs in your set list, and there are bonus downloads available as well. More songs are added to the list the more you play.

“Guitar Hero Mobile” also allows you to sign onto a Web site to track your performance. So far, I’m a rookie with 247,831 points. The site is designed so that the overall leader board displays next to your career stats, further driving home just how far you have to go as a player. The top player has almost 18.5 million points and every trophy the game awards. Like I said, I’ve got a long way to go.

This is a game I can see myself turning to to waste a little time every now and then. I don’t think I’ll ever reach 18 million, but I’ll have fun trying.

Socializing the Storefront, Part 1: Give Them Something to Talk About

Handcent SMS: Straight Up or With a Twist

QuickOffice for Android: Fills a Need but Not Worth the Price

Where’s Got Everything You Need Right There

TeeDroid Caddy Does Everything but Carry Your Clubs

FBook: A Diluted Version of the Real Thing

Wikitude: A Promising First Step for a Virtual Tour Guide