Pebble — once viewed as the little smartwatch company that could — last week cut its worldwide workforce by 25 percent, according to news reports.

That’s reportedly about 40 people, but actual figures are hard to come by because Pebble is privately held.

The company has raised US$46 million, but CEO Eric Migicovsky blamed the layoffs on the difficulty of raising funds in Silicon Valley these days.

“Pebble was an early innovator but always had an uphill battle to take on the big boys of consumer electronics in terms of going after the mass market as a share leader,” noted Cliff Raskind, a research senior director atStrategy Analytics.

“This is not to say that it can’t gain and keep a loyal following and do it profitably if growth is managed properly,” he told the E-Commerce Times. “That may not have been the case.”

Swimming in the Shark Tank

IDC predicted Pebble’s stumble in itswearables forecast, released earlier this month. Its avid fan base and unique hardware and software platform will enjoy modest growth in the short term, but competitive pressures will see it gradually lose out to bigger companies.

The “supercompetitive pressure” from Android and Apple’s watchOS exacerbated Pebble’s problems because “when you put its watches alongside Apple and Android watches, consumer expectations change,” Llamas told the E-Commerce Times.

Overall, watch and wristband shipments will total 100 million units, compared with 72.2 million in 2015, IDC predicted. Smartwatches with an app ecosystem, such as watchOS and Google’s Android Wear, will continue to make gains.

Apple has cut the price of its smartwatch by $50, fueling speculation that demand for smartwatches was overestimated.

Getting Drop-Kicked by Smartphones

The display “will significantly reduce the need and demand for a smartwatch because it offers similar and even better functionality,” he told the E-Commerce Times, adding that smartwatches are an endangered species.

Other manufacturers will implement always-on displays on their OLED smartphones because it’s “a major advantage and isn’t hard to implement in hardware or software,” Soneira predicted.

Rumors that Apple will switch to OLED screens are rife, and, when it does, “I’m sure they will also provide an always-on display,” he said.

However, there always will be a place for smartwatches, IDC’s Llamas insisted, but they will have to evolve. “Wait until they have greater connectivity such as cellular connectivity.”

Pebble will focus on the health and fitness of its wearables, which elicit the most interest from users, CEO Migicovsky reportedly said.

However, the company also will face considerable competition and falling demand in that area.

Apple and Google are major players in the health and fitness markets. Meanwhile,Fitbit, king of the wearables, is in trouble, having seen its stock price fall in January to below the $20 IPO price and having shed one-third of its value.

Still, “fitness and healthcare are the long game,” Strategy Analytics’ Raskind pointed out. “This is a market still in its youth.” 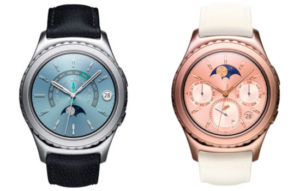 Samsung Gear S2 Scores Points for Looking Like a Watch