Home Networks: Beyond Stage One

The use of a home network largely as a broadband-sharing mechanism is just the first of several stages in the evolution of home networking. Both consumers and carriers will use connectivity for applications beyond shared Internet.

For consumers, the desire to share multimedia content (music, photos, video) among different devices will drive adoption of digital media adapters (DMAs), either stand-alone or integrated with other platforms such as a set-top box.

Carriers see the deployment of home networks as a service differentiator and a means to promote customer loyalty. They will also seek to monetize their customer premise equipment (CPE) deployment by putting additional services, notably voice and multimedia, on the network.

Home networking for relatively simple data-sharing applications (sharing a broadband connection) has flourished among consumers, who are growing increasingly reliant on broadband Internet connections. At the end of 2006, there were more than 22 million U.S. households with a data networking solution. 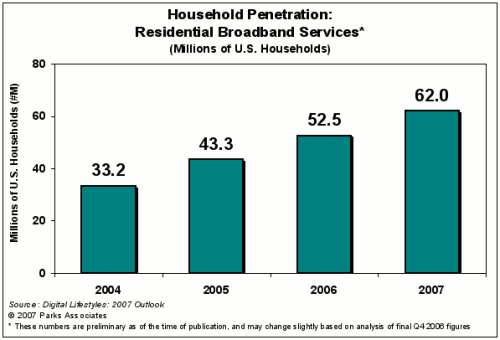 So far, retail has dominated the market for home networking equipment — only about 10 percent of home networks have been deployed by service providers to date. However, the benefits broadband providers and television operators can derive from home networking will ensure their growing involvement in the near and long-term future of this market.

In terms of hardware opportunities, residential gateways and set-top boxes will continue to evolve to enable service providers to:

The addressable market for linking a home computer to a legacy CE device is quite small at present. Furthermore, the early market for DMAs hasn’t fared as well as many manufacturers would have hoped due to challenges such as higher prices and less-than-perfect connectivity.

That being said, there’s reason to believe that a market for multimedia networks (PC-to-CE) will emerge as consumer use of digital content services increases and as they seek ways to extend entertainment beyond the home computer.

A key driver for growth in this category will be consumers’ increasing reliance on online content services, including music, gaming, and video services. As consumer use of broadband in accessing and obtaining content increases, links between the service and the devices will be important in extending the entertainment experience. 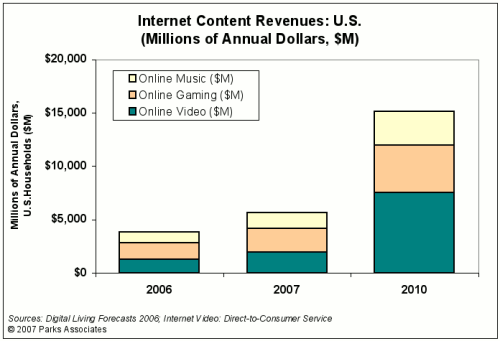 In addition to the stand-alone DMAs that have characterized the market to date, there are significant opportunities ahead for media adapters embedded in consumer electronics equipment.

Key features of connected entertainment devices will be robust storage and the ability to request and stream content stored on multiple hard drives around the home. Platforms such as the whole-house DVR — deployed mainly by television service providers — will lead the category of embedded networked devices; however, other products — including game consoles, televisions and DVD players — will play an important role in the connected living room.

Consumer electronics manufacturers will use these products, with differentiating features such as connectivity, the ability to seek and pull in alternative content sources, and backup services, to grow their market share and revenues.

Kurt Scherf is vice president and principal analyst for Parks Associates.
Get Permission to License or Reproduce this Article