HootSuite has incorporated paid advertising into its dashboard for the first time with the rollout of HootSuite Promoted Products integration for Twitter. It allows users to buy Promoted Tweets and manage their accounts on the HootSuite dashboard. 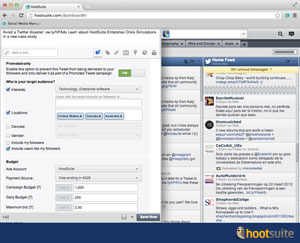 This is a significant step for HootSuite’s users, Greg Gunn, VP of business development, told CRM Buyer. “We have over 6 million users that rely on our software to manage and coordinate organic media strategies.”

Adding paid advertising to the mix — along with the integration’s various work flows — will address a number of bottlenecks for users, he said.

Without the integration, a user would create content and post or schedule it directly from the dashboard. To incorporate a paid ad into the mix, the user would have to navigate to the Twitter ad interface. Tweaking the ad campaign or accessing analytics would require going back and forth between the dashboard and the ad interface.

“We wanted to make the job of creating content, engaging with the user, and amplifying content as easy as possible,” Gunn said, “so we baked all of these steps into the integration.”

The integration includes user controls and permissions as well as analytics and reporting tools. For example, say a company intern notices that a particular tweet is playing well, said Gunn. Though not authorized to take the initiative to promote it, the intern can take advantage of the integration to push it along the chain of command very quickly.

The intern right-clicks on the tweet on the dashboard, then assigns it to an employee, including an explanatory note. The employee receives a notification and then goes to the dashboard to investigate.

“The dashboard lets that employee amplify the tweet with Promoted Tweets” if desired, Gunn said.

The dashboard also provides targeting information, budgetary details, keywords, users handles, user demographics and so on. All an authorized employee has to do is hit send from the dashboard to promote the tweet.

Collaboration Among All Stakeholders

“We have the ability for brands to get both digital agency and ad buyers on the same platform, so the folks that are creating the content can collaborate,” he pointed out. The work flow would be similar, with one user sending a tweet to colleagues for collaboration.

The system provides analytics reportis on the dashboard as well.

“It aggregates all the campaign information, said Gunn, “but the user can also drill down to get into granular details on which content is performing well.”

HootSuite Promoted Products integration for Twitter is available as a limited beta.

When the Lights Go Out, Social Nets Can Be More Than Friends