How to Fix VC Once and For All

This column was originally published by The Venture Company.

The venture business needs an overhaul, and below is my low-burden / high-impact plan for change.

Venture capital (VC) is a systemic risk to our innovative culture, to US$200 billion in direct asset allocations and to $2.9 trillion in spawned revenues (since 1970, per IHS Global Insight report). Yet VC has produced less than 10 percent IRR (internal rate of return) for the last 10 years, promoting a fear/flight response by limited partners (LPs), on the verge of pulling their money out of the sector and investing it elsewhere.

Top technology and investment experts like Larry Ellison, Vinod Khosla, Greg Lamond and many other luminaries now subscribe to the mediocrity of the current state of venture, with Mike Moritz (GP Sequoia) stating venture has been underperforming for 20 years. I agree.

Direct and circumstantial evidence suggest that the venture business needs a major overhaul to ensure that the assets of the limited partners (money) are effectively lined up with the unwavering assets of the entrepreneur (innovation). Just because the intermediary “dating” service (VC) is broken does not means we should lead to conclude supply (LP) and demand (entrepreneur) side participants are.

LPs are still looking to deploy high-risk/high-yield commitments, and entrepreneurs are still coming up with highly disruptive ideas. The economic marketplace where those transactions occur is simply structurally ineffective.

Technology venture should be producing premium returns because of:

I cannot think of a better asset class or sector where the development of an idea can lead so quickly to immediate and widespread customer impact. Unlike biotech or greentech, the attributes of technology venture are such that they will produce returns compatible with the 5- to 10-year life cycle of those funds — that is, if the market intermediary makes the right choices, guided by relevant experience.

Venture investing needs to move from an artificially restricted market to a free market in which the transparency of — and to — all participants identifies and perpetuates the ever-changing meritocracy of innovation. 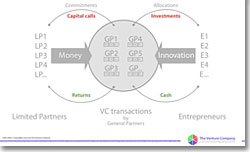 That means all participants need to adopt free-market principles so that the merit of their work, not an artificially privileged status, distinguishes them from others. Such is the necessary, sustainable and thriving foundation for innovation and capitalism.

No one will be able to hide, and the marketplace as a whole will automatically give preference to those participants and their transactions that build real success. Only capitalism based on merit is sustainable long-term.

Above is a simplified chart that depicts the venture marketplace. For those unfamiliar: LPs invest in VC funds which, by virtue of a lead GP, invests in the startup of an entrepreneur. LPs set aside a predetermined commitment to the VC fund, and GPs make capital calls when required by their investments into startups. GPs allocate a certain runway for startups, and at funding time stage their investment in investment rounds to mitigate risk. At M&A or IPO cash is returned to the VC in exchange for the equity position, and VC returns a part of those funds (minus management fees and other reserves) back to the LPs.

To enable a meritocracy, the marketplace needs to enforce full transparency to all of its participants — at the transaction level by GP, not by VC firm. More important than to feed the Security and Exchange Commission (SEC), the marketplace itself (not a government agency) will then govern its own success.

I realize that type of transparency will get VCs all riled up; they recently testified to congress as such. As protectionists of their current walled gardens, they fear that such disclosure would challenge their competitive stance. Exactly — and that is what we want.

Because today the cartel VCs have formed around their collective wisdom, outdated execution and dismal returns prevent really smart entrepreneurs from participating in venture transactions to begin with. If VCs believe so firmly in the proprietary value-add of their services to the investment process, why would they be afraid to disclose everything but their secret sauce? Investment dollars into a company can be derived from other sources, but it is very cumbersome if not impossible to retrofit to the exact origination and source in the marketplace model.

LPs would have less of a problem disclosing such information, and many, like pension funds, already do. However, they will need to firm up that reporting to the standards of the marketplace, not an incomplete disclosure that does not match up with that of its peers.

Not Public Is Not Private

Economically — and to minimize abuse — all companies should be transparent to some extent, including private companies, at least to meet the above described marketplace requirements.

Not all transparency is created equal. In a marketplace, the transparency needs to be provided to all participants — LPs, VCs and entrepreneurs in the same fashion, and not just in case of suspected abuse and post-mortem to the SEC, since that kind of transparency does little to promote marketplace merit.

In the same way banks are supposed to report certain transactions above $5,000, we should disclose the investments in private companies above a certain threshold. In other places outside the U.S. (such as Europe), private companies already need to abide to certain disclosures, paving the way for meritocracy.

Entrepreneurs are often proud to disclose how much money their idea generated were it not for acquirers, who, afraid of competition, often press for non-disclosure. Yet those numbers will now come out of the new marketplace, and competition as a vital ingredient for exits is re-established as well.

Once we have the fundamental transparency of the marketplace in place, the following benefits will surface almost immediately (especially when we apply this transparency retroactively):

The merit of all participants will be disclosed, by virtue of their investment in success.

The goal of this plan is to serve the risk/reward needs of LPs and connect that with highly disruptive innovation from great entrepreneurs. No drastic changes need to be made to the current investment model. No drastic change in the investment pace needs to take place until the meritocracy demonstrates otherwise.

Transparency to all participants will act as the dynamic referee in an ever-changing venture business. Compared to the past, merit will now closely follow and support the change of innovation, rather than remain stale and outdated. The meritocracy of the marketplace will also determine whether or not the venture business is too large, too small, or just right. However, it would be highly inaccurate and irresponsible to make those decisions based on the workings of the venture business today.

How You Can Help

I am already working with individual LPs to familiarize them with the specific rollout of this plan, and I invite others to participate (contact us here). I also extend a hand to VCs, some of whom have responded, to become be part of the solution. I would like nothing more for us, as participants to the venture business to solve our own problems, without the need for government intervention.

The venture business is too important to our economy (for the reasons mentioned above), and we owe it to the entrepreneurs (across the world) to build a financial system that supports the merits of their intellectual brainpower.

Join me in this effort and feel free to spread the word. Let’s make positive change happen.

Georges van Hoegaerden is the managing director of The Venture Company.
Get Permission to License or Reproduce this Article

So You Want to Start a Tech Business, Part 2

So You Want to Start a Tech Business, Part 1