How to Make a Drone Delivery: Google’s Winging It 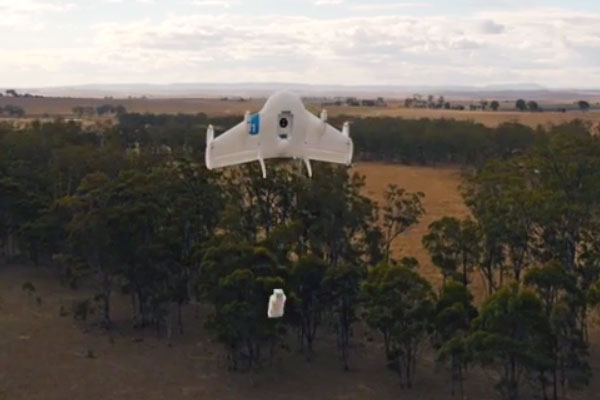 Google on Thursday introduced Project Wing, a drone-based delivery project it has been working on quietly for the past two years. Members of the Google[x] team (aka “Moonshots”) recently held field tests of the technology in Australia.

They were able use drones to deliver a first aid kit, candy bars, dog treats and water to a couple of Australian farmers.

“Project Wing aspires to take another big chunk out of the friction of moving things around,” said Captain of Moonshoots Astro Teller.

Google is years from rolling out a commercial product or service, “but this is the first prototype we want to stand behind,” said Nicholas Roy, founder of Project Wing.

“The Google drone delivery system is part of the company’s larger strategy to automate as much of the world’s physical and logistical tasks as possible,” said Rich Hanley, associate professor and director of the graduate journalism program at Quinnipiac University.

“Whether it’s self-driving cars or new package delivery systems, Google will seek to offload as much routine stuff [as possible] to technology that needs minimal — yet still important — human input,” he told the E-Commerce Times.

There are clearly competitive implications as well. Amazon earlier this year announced its Prime Air drone-delivery scheme, with an eye to making same-day delivery of goods purchased online. In short, the battle lines are forming over which companies and technologies will disrupt retail and e-commerce.

Right now there are many possibilities in this area, said Stephen Hartzell, partner with law firm Brooks Pierce.

“Amazon is already in the retail business and would, at a minimum, serve its own needs for delivery,” he told the E-Commerce Times.

“It’s not difficult to imagine that Amazon might also be interested in providing delivery services for other enterprises too,” Hartzell suggested.

“Google, on the other hand, doesn’t currently play the same role in retail that Amazon currently does, and it’s not difficult to imagine that Google would be interested in providing delivery services for myriad enterprises,” he said.

There have been hints Google was heading in that direction, such as its purchase of Titan Aerospace earlier this year, said Daniel Beckerman, a portfolio manager on Covestor who holds Google.

“Most of the publicity surrounding the acquisition at the time related to moving satellites in order to deliver Internet access to areas that do not currently have it available. However, the recent drone news demonstrates the ancillary benefits of the acquisitions Google has made,” Beckerman told the E-Commerce Times.

Many of their acquisitions seem odd at the time, and then turn out to generate exponential growth when plugged into the Google ecosystem, he noted. That was the case with YouTube and Android.

Before their plans can develop much further, Google and Amazon must get the Federal Aviation Administration on their side — or at least working on regulations to govern commercial drone technology.

The FAA is plowing through the technological, safety and privacy concerns, he told the E-Commerce Times.

Regulations are expected later this year, to be followed by a comment period. Then the FAA will respond to the comments and issue the final rules.

In short, Connor said, “we are a long way from complete integration of unmanned aircraft systems into the National Airspace System.”