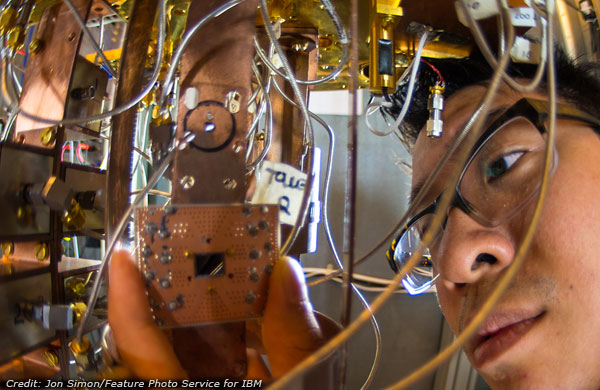 IBM’s earnings slipped in Q3, sending its share prices sliding 7.11 percent to close Monday at US$169.10.

The company announced it is unloading its Microelectronics OEM semiconductor business and manufacturing operations to GlobalFoundries. IBM will pay GlobalFoundries $1.5 billion to take over the business. The deal will close in 2015.

“Strip [IBM] from the equation and the Dow would be positive for the day,” Steven Russolillo wrote in The Wall Street Journal .

Warren Buffet has lost $1 billion on paper from the slide.

IBM’s earnings per share were down 8 percent to $3.46; net income from continuing operations fell 17 percent to $3.5 billion; the gross profit margin was 48.6 percent, down 40 basis points; and revenue from continuing operations totaled $22.4 billion, down 4 percent, before adjusting for its divested customer care outsourcing business and currency.

IBM’s global services revenue fell by 3 percent to $13.7 billion, a far cry from 2012 when strong profit margins in the services business increased net income by 7 percent and the stock was seen as heading to $225.

Big Blue was focusing on services and software in 2012; software revenues grew 5 percent then, and tech services revenue increased 2 percent.

Areas IBM has picked for its new strategic focus are doing well.

Business analytics revenue is up 8 percent.

What Led to Big Blue’s Woes

IBM apparently “locked in on a forecast by [former chairman] Sam Palmisano which didn’t anticipate many of the changes the market is now experiencing and that led to an overly aggressive outlook, which is at the heart of this miss,” remarked Rob Enderle, principal analyst at the Enderle Group.

“The problem is that growth in cloud services, while great, has not [been] fast enough to offset losses elsewhere,” Charles Sizemore, founder of Sizemore Capital, told the E-Commerce Times.

IBM’s problems are structural in that software increasingly is doing much of what hardware used to do, and competition continues to push down prices, he suggested.

Slower-than-expected recovery in foreign markets also hit the company hard, Sizemore said. “IBM’s management probably should have seen this [recovery issue] coming better than they did, but they’re certainly not alone here.”

“It would appear that IBM is indeed pursuing a new strategy in that they are speeding up divestment of their lower-growth businesses,” Sizemore said, pointing out that this is nothing new for the company, which sold off its PC business to Lenovo some years back and is now unloading its semiconductor manufacturing business.

Once the deal with GlobalFoundries is closed, IBM plans to devote more attention to fundamental semiconductor research and the development of cloud, mobile, big data and secure transaction-optimized systems.

IBM will continue to pour money into semiconductor research — it has committed to a $3 billion investment over five years — to position itself to take the lead in the next generation of computing.

Under the deal, GlobalFoundries will have primary access to the results of IBM’s research.

IBM is transitioning into “a very different company,” Enderle told the E-Commerce Times. “Often during transitions, legacy groups drop into decline as focus and top employees move to the new opportunities. We are seeing this happen at a number of companies right now.”

The industry as a whole is shifting from hardware to cloud services, Enderle pointed out.

“The future belongs to Apple, Salesforce.com and Amazon.com, which make complex things doable, simple things doable, and solve complexity with simplicity,” he told the E-Commerce Times.

“IBM, HP and Oracle have got their whole recipe wrong,” Chowdhry continued. “They are making simple things complex and complex things impossible. They’re trying to solve complexity with complexity, and we’ve seen the results.”

Still, IBM is on the right track, because “it is thinking, how do I reset my business?” Chowdhry observed. “They have got rid of the chip business and will probably get rid of many more things.”

Until companies ramp up capital spending again, IBM, Cisco and their peers are going to struggle, Sizemore suggested, and growth likely will be sluggish for the next couple of years.

Ending the Embedded Linux Patent War Before It Begins