Mobile apps have enjoyed phenomenal and increasing popularity in recent years, but what we’ve seen so far is just the beginning, according to a new Gartner report.

“iOS and Android app stores combined are forecast to account for 90 percent of global downloads in 2017,” said Brian Blau, research director at Gartner. “These app stores are still increasingly active due to richer ecosystems and large and very active developer communities.”

“This will be due to users tending to use the same apps more often rather than downloading new ones,” Blau said.

In-app purchases are expected to follow the same trajectory — that is, eventually slowing in later years after surging in 2017. In that case, the drop will be due to mass-market adoption of smart devices by consumers unwilling to spend on in-app purchases, at least not at the same levels as early adopters do.

A Gartner spokesperson was not immediately available to provide further details.

‘The Opportunity to Create Changes’

“Game publishers have consistently been ahead of the curve in terms of understanding and adopting new app marketing techniques — and in-app purchases are the primary revenue driver for games,” he said.

The industry with the most to gain from a wholesale embrace of in-app purchasing, however, is retail.

Retailers can definitely expect to benefit from this trend if they are willing to put some effort into their mobile strategies, Patrick Stack, manager of digital strategy at Acquity Group, told the E-Commerce Times.

Using responsive design, he said, “retailers have the opportunity to create changes depending on devices customers are using to better appeal to them through a CRM system.”

‘That Can Turn Shoppers Away’

That said, some retailers need to be aware that some consumers just don’t want to bother buying a product through a mobile app — not when there is an optimized website designed for easy shopping, according to Max Childs, marketing director forAmplience.

“More often than not, apps are actually a barrier to sale,” Childs told the E-Commerce Times. “Unless you are an absolute go-to website like Amazon.com, you are asking people to download your app in order to shop. That’s an action that can turn shoppers away.”

“In-app purchasing isn’t the only way to drive purchase through mobile advertising,” Black told the E-Commerce Times. “As ad delivery, optimization and engagement technologies for mobile continue to improve, so will the need for advertisers to utilize mobile — not only to drive in-app purchasing, but to trigger and drive purchase behavior to the Web and to brick-and-mortar locations.” 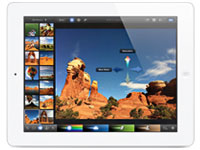