In the Linux Garage, Xfce Is Your Tough, Reliable Jeep

Xfce is a niche desktop environment. But given the moves developers are making with changes to KDE 4 and Gnome 3, not to mention Ubuntu’s new Unity desktop, Xfce may be just the ticket to take you to a calmer, more satisfying computing environment while staying with your favorite Linux distro. 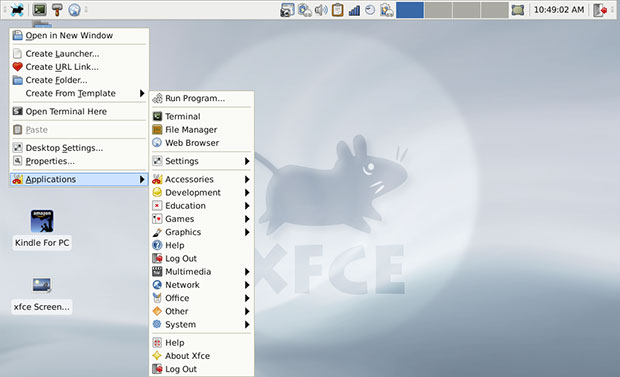 Think of the Linux desktop shell as a mode of automotive transportation. Your garage can hold several different car models from the same manufacturer. When you take a trip, any of these cars will get you to your destination. You decide your car type for the trip based on the cargo and the passengers and the degree of sportiness or luxury you want to experience along the way.

The Xfce is a feature-rich yet light-weight desktop environment. That does not mean that it is under-powered or only suitable for short computing hops. To the contrary — it is a reliable long-term computing workhorse.

The more I fuss around with the new GNOME 3.0 shell, KDE 4 and the new Ubuntu Unity desktops, the more of a fondness I develop for Xfce as an alternative desktop choice. It is fast, and it runs great on my older desktop and laptop computers as well as my newer gear.

Developers released Version 4.8 in mid-January of this year. The updated feature set and facelift ensures that running Xfce does not give you an out-of-date desktop. The components are retooled and tweaked to maximize what was a solid performance in version 4.6 for the last two years.

Two factors give Xfce real staying power for me. One is the retention of the classic application panel. The other is the handy menu and app launcher that pops up with a right click anywhere on the desktop.

Another great aspect to the Xfce desktop is its lack of clutter. You can show or hide a selection of system icons on the desktop using the Desktop Settings options. But otherwise, program applications do not reside on the desktop screen or the panel.

You can amply customize the desktop through the Settings/Xfce Settings Manager controls.The properties control lets you adjust the panel’s layout and location.

The desktop area lets you set protected margins to limit or maximize screen space. All-in-all the settings management functionality is all available in one place.

The Xfce desktop has proven for me to be a capable computing environment in a variety of situations. For instance, navigating among numerous open programs has worked well on my large-screen desktop computer, large and medium-sized notebook computers and a netbook screen.

This is significant, because working on the netbook computer with other desktops often requires me to scroll extensively. Often, the screen view looks compacted or stretched. Xfce provides a nice cozy fit regardless of screen size.

The panel bar, too, proved its value. Regardless of how many running apps I use in multiple work spaces, the app is clearly recognizable on the panel. Clicking that button instantly jumps to the app on the screen.

The work space switcher adds a handy redundancy. Mini views of open windows are recognizable in each work space view on the panel.

In addition to clicking a spot in the switcher or an app button on the panel, hold down the CTRL-ALT keys and press the left or right arrow keys to rapidly move through all open programs. This works across all work spaces.

Within a workspace you can quickly move among open programs by pressing the ALT-TAB keys. So you can navigate with hands on the keyboard or fingers on the mouse.

Except for the slightly different look and feel of the icons and some Xfce-specific apps, the Xfce desktop functions much like the GNOME desktop. Still, a few key differences exist.

One is the use of the Thunar file manager instead of Nautilus. This wasn’t a big deal in my adjustment to the Xfce desktop. I used Thunar as my primary file manager on the GNOME desktop before Nautilus grew the ability to show two location windows at once. So opening two Thunar windows to drag around files is a normal routine for me.

Another difference is Xfce’s reliance on the Xfwm4 window manager. But once you get used to its subtleties, it feels like home. I found this window manager to be much like the one used in Puppy Linux. That distro shares an entry on the boot manager on all of my computers.

The Xfce desktop comes with its own default applications. For instance, it installs with Xfmedia audio player, Orange Calendar, the Catfish search tool, Mousepad text editor and the Xfburn CD/DVD burner program. But that does not mean you are limited to just those choices.

On the contrary, I added the Xfce desktop to existing Ubuntu configurations. All of the programs I was using in GNOME and KDE work fine under Xfce. That includes an app dock.

The only really noticeable difference in using Xfce is in the flashiness. Xfce does not offer much in the way of eye-candy like you see in GNOME and KDE. But utilities do exist that bolt on some glitz and glitter if you insist. And the window manager does let you activate some snap to features.

It is easy to switch to the Xfce desktop. Once installed, you can select it or other desktops from the session log-in screen.

This makes it easy to try the Xfce desktop without permanently giving up the existing default environment. System updates and package management operations remain unchanged.

The quit button on the far right edge of the panel provides options to Log Out, Restart, Shut Down, Suspend and Hibernate. Additionally, you can check the box at the bottom of the action buttons to Save the session for future log-ons.

Consistently, the Suspend and Hibernate functions are rickety at best in most Linux distributions and desktop flavors. The performance of these two features in the Xfce desktop, however, impressed me.

The Xfce desktop is a win-win Linux environment. You can use it without needing work-arounds or extensive plug-ins. Plus, there is very little, if anything, to change about your computing routines.

The only downside is not having eye candy. And since Compiz does not work in Xfce, you will not be able to play with the rotating cube and the eye-popping screen and window effects associated with it.