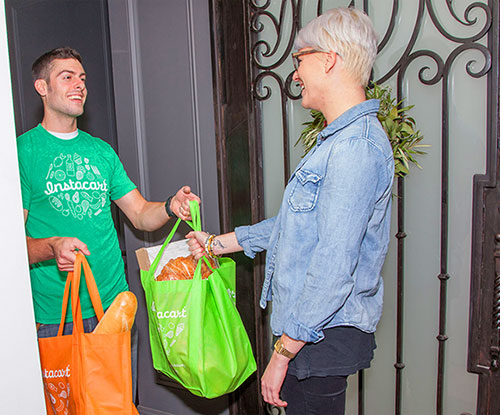 Grocery delivery startup Instacart on Tuesday announced it has raised US$220 million, following a $44 million investment round in June of last year.

The company uses a fleet of personal shoppers, who are independent contractors, to purchase and deliver items to customers.

“The two main differentiators for Instacart are our focus on grocery and our strategy to partner with retailers,” said Nilam Ganenthiran, Instacart’s head of partnerships.

Partnering with retailers means “we are the grocery store’s best friend,” he told the E-Commerce Times. “We are helping local retailers expand rather than competing with them.”

Customers place an order, which personal shoppers fill at local stores, such as Whole Foods Market and Costco.

Customers can specify how ripe they want their produce to be.

If they want something that’s not in Instacart’s inventory, they can add a special request specifying the item with details, so long as it’s carried by grocery stores.

Orders generally are delivered within an hour. Customers can review their receipts via text or email, or on their accounts. They also can download a PDF of their individual receipts from their order history.

Delivery is from 9 a.m. to midnight daily, depending on local store hours.

The firm’s Instacart Express service costs $99 a year after a 14-day free trial. Customers get free delivery for orders worth more than $35 that are to be delivered within two hours or at a preselected time.

The Instacart Plus service offers national brand products sourced from local discount retailers. Instacart builds in a delivery fee for each item purchased.

Competitors Amazon and Google currently are taking a loss with their local delivery services, investing in warehouses, trucks and other infrastructure, in the hope of making profits in the future, said Mike Jude, manager of the Stratecast consumer communication services program at Frost & Sullivan.

Instacart, on the other hand, “is essentially renting shoppers who physically do the shopping on behalf of the consumer,” resulting in far lower overheads than Amazon and Google, he told the E-Commerce Times.

“We use local stores as warehouses, and we don’t need trucks or full-time drivers,” Instacart’s Ganenthiran pointed out. Its personal shopper model lets it launch in a new city in two to four weeks, compared to the six to nine months Amazon Fresh requires.

With Google, Amazon and California chain Safeway all offering a grocery delivery service, why are venture capitalists throwing money at startup Instacart?

“Uber has done so well that people are looking for Uber-like services that have the same feel, and Instacart is based on an Uber-like model,” suggested Rob Enderle, principal analyst at the Enderle Group.

Shopping services have attracted a lot of investor interest because investors believe busy Millennials “would rather do things they like than things they have to, and shopping is a chore,” Frost’s Jude remarked. “Companies are reasoning that if they can come up with a formula that resonates with the Millennial crowd, there could be a very substantial market.”

That’s Instacart’s view, and the company plans to expand further in the United States and also to go overseas this year, though Ganenthiran declined to provide further details.

“There is a lot of runway in the market for grocery delivery,” Ganenthiran said.

While Instacart’s model of keeping overhead low is working, “it will give them a disadvantage at scale, and I doubt they can sustain like Amazon Prime,” Enderle told the E-Commerce Times.

“At some point, you have to find some way to aggregate the stuff so people will be willing to pay your prices, or you’ll have a cost disadvantage over time,” he explained. “Once the market matures, big players with warehouses and well-established logistics will come in, and it will be hard for Instacart to continue.”