IP Cam Viewer Pro, an app from Robert Chou, is available for US$3.99 at Google Play.IP Cam Viewer Pro lets you view and control an Internet protocol (IP) camera throughAndroid OS on a phone or tablet.

App features include SSL encryption, pan tilt and zoom, relays for lights and garagedoors, and recording functions. DVRs and network video recorders also can be controlled.

Included are add-ons like a traffic camera database and camera sequencing.

The publisher reckons that more than 800 makes and models of cameras aresupported.

Before you start, you’ll need to know the IP address of the camera on your network andwhich port the camera uses. Your camera may also be configured with a User ID andPassword.

I found that by opening the IP camera’s configuration screen on the laptop I used toset the IP camera up in the first place, I was able to retrieve this information, note it, andenter it in the IP Cam Viewer Pro app on a tablet.

However, there was a lot of unintuitive opening of screens on my camera’s interface togather the required data, and — though this was no fault of IP Cam Pro publisher RobertChou — it did add to the time required to get IP Cam Viewer Pro working properly.

I used a Trendnet SecurView TV-IP110WN camera hard-wired to a router for testing.

I estimate that it took me about 5 minutes to configure IP Cam Viewer, and I am asavvy computer user. This is not an app for those unfamiliar with IP camera setup.

If you set up the IP camera first time around, you’ll figure it out. Ifsomeone did it for you, allocate some time for discovery.

Getting Into Record Mode 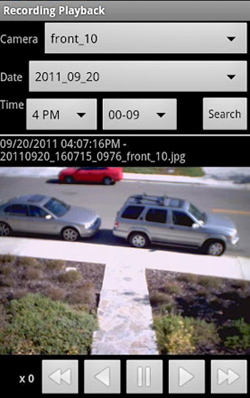 Record mode is included in the paid “Pro” version and substantiated the $3.99 app price.

Default clip recycling kicks in when free space gets to 500 MB, but you can change this.

Chou is very clear that using record mode on a daily driver tablet will burn through yourbatteries. So he provides an intriguing alternative, which is to use a redundant tablet orphone just for the recording.

I loaded the app onto an entry-level Samsung Y smartphone I had lying around, andplugged it in to its charger. Recording took place and appeared to proceed indefinitely. Anice touch.

Google’s Play store shows the app as compatible with Google TV. I was unableto get it to install on my Logitech Revue GTV box, however.

The “Installing” message would notcomplete. This may have been an issue with the box rather than the app, as the Revue isgenerally flaky.

Despite an ugly app UI, image quality with the app was similar to the Trendnet camera-supplied, PC-installed software.

Disappointingly, I couldn’t find a motion detection function on IP Cam Viewer. That’s auseful function that allows you to map a zone within the frame and trigger an email withimage attached when the software detects motion.

This means IP Cam Viewer can’t replace a home-based PC. You still need to leave a PCswitched on at home-base for certain camera functions.

Camera remote network viewing was complicated to set up. It involved opening ports onthe camera-connected router, verifying the port, knowing your ISP-assigned IP addressand so on.

If you’re unfamiliar with port forwarding, allow a good few hours to get up to speed. Iwas able to successfully view the home-base networked camera while on a mobilenetwork — it just took me a while to get there.

This app has a lot of features. I had a pleasant afternoon learning the intricacies ofthis app, and don’t want to scare you off by rambling on about IP addresses and portforwarding.

If you’ve never explored those elements of configuration, this is a fine app to learn on.