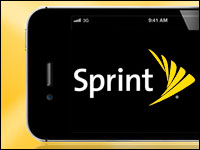 Worse, from Sprint’s perspective, is that there’s a strong chance Sprint may have to declare bankruptcy at some point, Bernstein analyst Craig Moffett said in a research note.

Shares in the company dropped by 4.5 percent after its release.

Moffett took pains to say he was not predicting Sprint would declare bankruptcy — rather, that it is a legitimate risk facing the company and one that is growing.

Sprint is facing a two-fold challenge, he said: its burdensome contract with Apple; and its hobbled 4G capability. In addition, the company has been laboring under a heavy debt burden, which means finding a solution to either problem will not be easy.

Sprint is lagging behind the leading wireless providers in the market, AT&T and Verizon Wireless, in its deployment of a 4G network. It buys 4G WiMax coverage from Clearwire, but it is moving away from that arrangement. It plans to build out its own network over the next two years, in a project estimated at $10 billion.

Sprint is clearly not going to gain any 4G capacity from LightSquared, Azita Arvani of the Arvani Group told the E-Commerce Times.

“With LTE gaining momentum — with both Verizon and AT&T expanding coverage — this clearly is a competitive issue for Sprint,” she said.

What’s more, the release of a new iPad that supports 4G LTE wireless spotlights the need for LTE coverage more than ever before, she added.

Sprint’s deal with Apple to offer the iPhone is a major problem, in Moffett’s eyes. Offering the iPhone will cost Sprint $15.5 billion over the next four years, he pointed out. And in the hope of gaining an edge on AT&T and Verizon, Sprint is offering more generous data usage terms, which will limit its financial wiggle room even further.

Of the two issues highlighted by Moffett — the lack of a robust LTE network and its contract with Apple — theits network shortcomings pose the greater risk to Sprint right now, Arvani said.

“Whether the combination of all these factors will result in bankruptcy for Sprint, I cannot say, however,” she concluded.