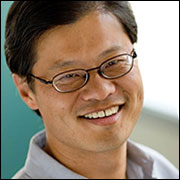 Jerry Yang is no longer “Chief Yahoo.” He left Yahoo after 17 years.That’s the news most people read or hear. Most people don’t know Jerry or his approach. Let me share a personal story.

In 1995, I first met Jerry at Yahoo. this was before the company waspublic and before anyone really cared much at all about “the Internet.”First thing I noticed were the purple chairs in the lobby. They lookedlike something from a kids’ TV show set. Fun and different.

Jerry met me in the lobby and took me on a brief tour. Brief becauseYahoo was maybe 50 people then. Maybe. Everyone worked on one floor in arectangle-shaped area with Jerry in the middle.

He had the worst desk in the building in terms of placement. No windowview. In a hall. He said he liked to be in the middle of the action, andit made sense to me. Yahoo wasn’t about show or flash.

He walked me around to meet employees and I was pleasantly surprisedwhen a tall, lanky, rail-thin kid (about 6′ 4″) stood up and said”Steve!” I did a double take and it was Mike Foster, a guy that went tomy high school in Southern California. Mike was a band geek in highschool and the last guy I would expect to see at Yahoo. And yet he was afit, Yahoo geeky cool.

Across from Jerry’s desk was a cubicle with scattered magazines, sodacans and more items that made it look like a college dorm room had been crammed into it.

I thought to myself “great, it’s not about suits and ties and phonyimage.”

Jerry led me to a conference room and went to get “the guys.” A fewminutes later, CEO Tim Koogle and CFO Gary Valenzuela walked in withJerry.

We all sat down and talked about this new-fangled medium called “theInternet” and discussed business models, the ad industry, and whether advertisers would show up in this new medium. I talked about the cable TV, broadcast and other mediums, how their mix of ads and subscriptions couldeventually be the Internet model.

Those were the days when there was no video, no audio, no advertising onthe Web, and when few people at all were online. Those who were onlinedid so via Prodigy, Compuserve or the new kid, AOL. Those were NOT theInternet; they were closed online services that required their ownsoftware to sign on and deliver content.

After about an hour, Jerry asked me to get some lunch with him. We exitedto the parking lot, and I expected to see him march toward a fancysports car. He walked over to a beat-up old Dodge Ram truck with a cabon it.

“That’s mine,” he said. As I got in, he mentioned the dog hair on the seat, saying his dog (a husky as I recall) often rode with him. The dog wasn’t there that day, but the hair and dog smell were. The more I saw Jerry, the more I thought he had something special. No flash or gimmicks.

As we left the parking lot, we passed a Taco Bell.

“That’s the unofficial company cafeteria,” Jerry said, “but today we’llgo to a deli that’s a bit better. Besides, Marc Andreessen (Netscape’sfounder) also may be there — maybe we can say hello.”

My first impression of Jerry was he was not in it for the money — thatYahoo was “something special” in tech, a creative, fun place to work, acompany leading the way into the untapped world of the Web as abusiness.

A few months later, I put together a conference in Los Angeles andinvited 12 CEOs of Internet companies to come and talk. I asked 12figuring that maybe half would not show. They all did.

Eleven CEOs of the top Internet companies sat around a fold-out picnictable, sitting on unforgiving metal chairs. It was like the UNof the Web. Between all of them lived the new industry.

We waited a few minutes to start the conference and Jerry walked in,smiling like a kid who just got an ice cream cone. He pulled up a chairas the other CEOs made room.

“Sorry I was late — my plane was late.” Jerry had flown coach from SanJose to LA, despite having put the first of a few million in the bank.

I asked every CEO at the table what they were focused on. All gave goodanswers for the audience. Jerry made the most memorable comment:

“As I flew down here, I was thinking the whole time how Yahoo can makethe user experience better.” I thought Yahoo at the time was alreadylight years ahead vs. the boring “home pages” done by others. Again, Ithought, this guy is pushing the edge — not satisfied. Good.

Of the 12, he was the only one who mentioned this.

My immediate thought was “this guy gets it. He’s tuned in. He’s also notarrogant, but humble.” I knew then that Yahoo would go on to be a hugesuccess.

It did. Brand, financial and otherwise. That focus gave Yahoo the edgeto beat Excite, Infoseek, Lycos, Hotbot and many more search anddirectory sites.

Since then the “user experience” has been the key ingredient of the Web.Other companies picked up the mantle, even as Yahoo lost it.

Pundits can and will dissect what Yahoo has done wrong. Armchairquarterbacking is easy. People who never knew the seed from the tree.

The one thing I know is Jerry Yang was the force at Yahoo before things wenthaywire and the company lost its place at the center of the Web experience.

It’s not about billions of dollars, etc.

It’s about a guy who had a dream and with a college buddy (DavidFilo) did something that — for a time (even a long time in Internetyears) — was the world’s most inspiring and original Internet company.

My hat’s off to Jerry and David. The Internet wouldn’t be the samewithout their quirky vision. What’s Jerry’s second act going to be? 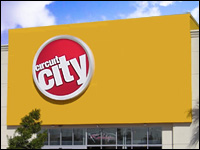 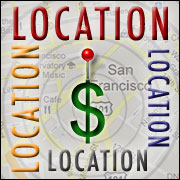