Krusader is one of those must-have computing toolsthat turns difficult or tedious computing tasks into easy,point-and-click operations. It’s an advanced twin-panel file managerthat’s loaded with features. 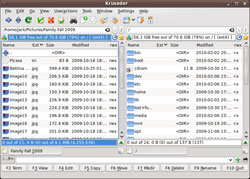 When I made the switch from the Windows to the Linux operating system,I had a short list of program requirements. This list was a match tocritical computing procedures I relied upon in Windows. I quicklydiscovered that Linux offers numerous twin-panel file managers, butvery few have the power built into Krusader.

One of my favorite Windows file managers was Norton Commander. Yearsafter using it, I found even more features in a program called “PowerDesk.” That program set a high standard to match when I began searchingfor an equivalent Linux file manager.

One of the great joys of Linux computing is the variety of installedprograms that come with different distributions. Krusader isavailable in most of the popular distros’ package management systems.See the list on the download page here.

This location also provides basic steps for installing Krusader indistros that do not include it in the resident package manager. If youare new to the Linux desktop, this lack of a uniform installationroutine like Windows uses can be a deal-breaker.

Krusader is designed for the KDE desktop. Typically, dependencies orrequired library components that are missing can prevent anapplication designed for KDE from running on a Gnome desktop. However, thatissue is easily remedied with Krusader.

This file manager does not need the KDE window manager to run onyour computer. Although Krusader’s natural environment is KDE, it usesonly some shared libraries. If you download the Krusader package foryour specific Linux OS, it should contain the required dependenciesand will install them as part of the setup process.

Some 10 years ago, two computer programmers started to createKrusader. Their work began as a personal work tool.The developers wanted a file manager that worked in the Linux OS theway Total Commander (formerly Windows Commander) worked in theMicrosoft environment. They released Krusader under the GNU GeneralPublic License. The community has continued to develop and improveKrusader over the years.

In Linux, file managers that mimic the architecture of the NortonCommander interface are called “commanders.” That is what Krusader does.

However, true twin-panel file managers do so much more. I tend to useKrusader as a file launcher, file archiver and jack-of-all-tradesutility tool. Rather than having to scroll through the desktop menusto start each system utility to do a file management task, I just useKrusader’s built-in features as if it were a control dashboard on thedesktop.

One of my favorite uses for Krusader is managing archives. I receiveattached files compressed in many different file compression formats.With Krusader, everything I need to work with archived files as wellas a variety of graphic image types is right there on the toolbar.

I never have to track down a decompression app or waste hours figuringout manual commands. Instead, Krusader lets me transparently viewarchives as if I were viewing a directory on the hard drive. Sure,other Linux apps do the same thing, but Krusader puts that functionalong with many others all in one place.

Krusader’s display is clean and simple, but these good looks are farfrom deceiving. Clicking on a bevy of drop-down menus on the top rowor icons in the tool bar on the second row provides access to most ofthe feature sets.

In a design reminiscent of the Microsoft environment, thebottom edge of Krusader’s dual-panel display contains a row offunction key commands. They facilitate direct commands such as View,Edit, Copy, Move, Make Directory, Rename, Delete and Quit. Thecommands work both by pressing the function key or clicking on thelabeled button with the mouse.

Above this row is a command line. Although my computing roots stemfrom the DOS (Disc Operating System) days that predate the Windows GUI(Graphical User Interface), I rarely ever resort to CLI (Command LineInterface) usage in Linux. However, I like the easy access when it isnecessary. For instance, the Function 2 button opens a terminal in thecurrent directory in addition to entering commands in the always-thereprompt window above the function key row.

For instance, I store data on several primary thumb drives. Thesedrives sit in USB sockets of whichever of my array of computers I amusing, so all of my data is readily at hand. To keep tabs on remainingfree space, I click on the Tools drop-down menu and click on the DiskUsage function. I then browse to whichever drive or hard diskdirectory I’m using and click OK. Krusader shows a multi-colored graphwith the space each file consumes and the total space in use.

Similarly, dozens of file maintenance tasks are simply handled throughpoint-and-click navigation. For example, I store backup copies of allmy critical files on each computer — desktops, laptops and netbook.Using Krusader, I display the file location on the hard drive in theleft-hand panel and the file directories of the large-capacityexternal hard drives or thumb drive on the right-hand panel. Then Iclick Synchronize Directories in the Tools drop-down menu to sync bothlocations.

Whether viewing files in a directory list or editing text and graphicfiles, handling archived files, or splitting large files into smallerpieces for faster Internet delivery, Krusader has a tool for that.

Krusader is so ingrained into my personal computing routines that Irarely close it. It is much easier to move around within Krusader’sinterface than to slide around Linux menus.