Spoiler Alert: At the end of “Mass Effect 3,” the Earth is not saved, and there isn’t much players can do about it.

Normally, the resolution of a video game’s story line — even one as popular as “Mass Effect 3” — would not be news outside the gaming sector. In this case, however, some fans are so disgruntled that they’ve lodged a complaint with the Federal Trade Commission alleging that Electronic Arts and BioWare engaged in false advertising.

A petition has also surfaced demanding a change to the finale. 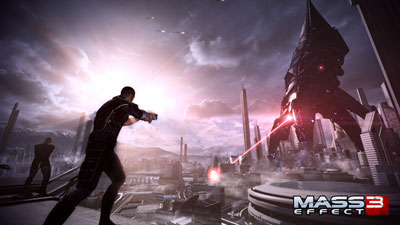 “We demand for EA and Bioware to deliver us an ending DLC that adds what we want and that is for our choices to affect the games ending, so if we want to destroy the universe the cycle of destruction continues and if we get everything perfect we can ( just for example ) see Liara and Shepard get their little blue children and get old,” the petition says.

The gamers wouldn’t feel so aggrieved, they say, if they hadn’t been led to believe that they would have more autonomy over the ending. On such forums as the BioWare Social Network, they point to aprerelease review that appeared on the Official Mass Effect Website promising users “the decisions you make completely shape your experience and outcome,” along with similar statements made in interviews with gaming publications.

In short, these users are claiming there was no “meaningful player choice” or “multiple significantly different endings” or “closure for the characters and series” as promised at various points during the runup to the release.

Without getting into a nuanced dissection of the game — an exercise that has been carried out in game publications here and here –a case can conceivably be made that the gamers are correct.

The question is, will the FTC follow through and investigate?

“Its consumer protection division includes entertainment and ratings on video games,” he said. “I think many people would be surprised at the areas that they consider important in terms of consumer protection. The FTC charter is, after all, to protect consumers, which is very broad.”

The subtleties involved in this particular case, though — did the pre-game promotion absolutely promise gamers a particular ending? — make it hard to guess whether the agency will want to establish a precedent by moving forward, he said. Such a precedent could easily be construed as too intrusive.

Among those who believe the gamers don’t have a case — or even a legitimate gripe, for that matter — is Michael Pachter, managing director of equity research at Wedbush Securities.

“It does not appear that the company misled consumers, intentionally or otherwise,” he told the E-Commerce Times. “There is nothing in the promotional materials that says “play this game and we guarantee you will save the world. The complaint is ridiculous to the point of being laughable.”

It’s like suing James Cameron because the Titanic sank at the end of the movie, he continued, emphasizing that the game is fiction, and the complainants have “to grow up and accept that.”

The players complaining are a vocal minority, he said — a very small one.

“There will be no impact on Electronic Arts as a company unless they cave to the vocal minority and create an alternate ending,” suggested Pachter. “Then, consumers will learn that they are wimps, and will complain about ‘Madden NFL’ because their quarterback doesn’t throw the ball far enough.”

The FTC and BioWare did not respond to our requests to comment for this story.

WinPho Struts Its Stuff at CES