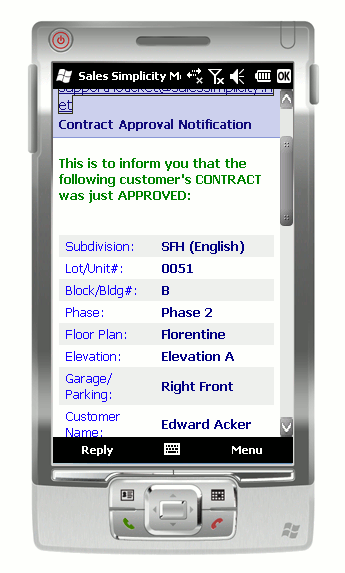 Contents of the email notification

Sales Simplicity Software, a sales automation, CRM and e-marketingapplication for the builder, developer and senior-living industries,discovered an untapped need among its customers when it rolled out thefirst mobile version of its application about a year ago.

The way the new home sales process works is that builders show prospective plans to customers in their sales offices, almost always on weekends. The buyers make an offer, and contracts are drawn up — again, almost always on the weekend. Theagent sends the contract for approval to the sales manager, who,because it is the weekend, is nowhere to be found.

“I think a lot of home builders had been frustrated by the timinggap,” Barry Forbes, Sales Simplicity’s president, told CRM Buyer.”Especially in the last year or so, with home sales such a problem,builders want to be able to get a deal sealed on the spot.”

The app works on any Web-enabled mobile device or smartphone,including BlackBerry devices, iPhones and Android phones.

A transaction begins at the sales office, where the rep haswritten up a contract based on the buyer’s offer. It gets sent to thesales manager’s mobile device, where the contract andother information is displayed. This data includes the notes on the back-and-forthnegotiations and — most key of all — the margins the builder willrealize with the offer. That information is not visible to the salesrep, and certainly not the buyers, Forbes explained.

If the sales manager likes the deal, the contract can beapproved from the device. It is then sent back to the sales rep’sdesktop where it is finalized and signed.

If the marginsare too low or there are other negative characteristics to an offer, the sales manager can respond with a counteroffer. The app helps themanager reach the desired margin, Forbes explained. “Let’ssay it is off by 1 percent; the app can help you figure out if youincrease the options [in the counteroffer] by (US)$5,000, or the base priceby $10,000, you will get the margin you want.”

Back and forth the negotiations go until a deal is eitherreached or abandoned. The app keeps track of all of it and allows the manager topull the email workflows when necessary, Forbes said.

Builders like the app because there is a sense it has a direct impacton margins, even though that theory has not been quantified by SalesSimplicity or its homebuilder customers, Forbes said. “But yes, we have heard that the app has likely resulted in more sales, especiallyin these times.”

In the current environment, buyers are looking for reasonsto discard a homebuilder from their list, he observed, and not being immediately available to respond is often agood one.

The company upgraded the app about a year ago to better track some ofthe workflow emails, and now it is considering anotherchange, Forbes noted. “Just yesterday, we got a request from a builder to expand itso it can handle land lot sales.”