Most Everything’s Coming Up Roses for Microsoft 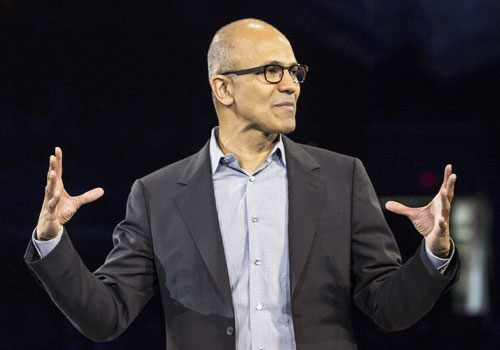 However, revenue totaled $23.2 billion, compared to the previous year’s $18.53 billion.

Bear in mind the results include $1.14 billion, or 11 cents a share, in costs related to Microsoft’s restructuring plan and the ongoing integration of the Nokia devices and services business.

Analysts had expected revenue to total $22.02 billion and net income to be 49 cents a share.

Microsoft CEO Satya Nadella attributed the growth to innovating faster, engaging more deeply across the industry, and putting customers first. He said in essence that the company was delivering on the new direction he spelled out in a memo to Microsoft employees back in July.

“A large part of Microsoft’s strong quarter can be attributed to groundwork laid before Nadella was appointed,” said Ezra Gottheil, a principal analyst at Technology Business Research.

However, “I believe his approach will help Microsoft perform better,” he told the E-Commerce Times.

Nadella homed in on four important indicators of progress: the rapid growth in cloud services; a stronger Windows ecosystem; strong sales and improved execution in hardware, including gaming; and renewed energy and momentum in partnerships.

Commercial cloud revenue grew 128 percent year over year, and 80 percent of the Fortune 500 were using the Microsoft cloud, Nadella said.

Surface tablet sales took off, driven by the Surface Pro 3, which was available in 28 markets, and sales of Lumia phones grew, being strongest in Europe where lower-priced devices took off.

Gross margins for the Surface were positive this quarter, said CFO Amy Hood, and Microsoft expected to break even on phone hardware in fiscal 2015.

Gaming “will drive additive business value for Microsoft,” he noted.

There is “a lot of room for growth” in what Microsoft calls “productivity platforms,” for both the commercial and consumer sectors, Gottheil said.

“Azure, SQL Server, even Dynamics are picking up steam, and the move to subscription payments and cloud-based delivery makes Microsoft’s business smoother and sticker,” he continued. “There’s no need for Microsoft to move out of its strength areas to pursue very different businesses.”

Hybrid cloud, analytics and artificial intelligence are the three high-growth areas the market is shifting to, and that’s where Microsoft might seek further growth, said Rob Enderle, principal analyst at the Enderle Group.

Microsoft for years has been targeted by critics as lacking the cool factor, unlike Google and Apple.

Microsoft “is still in the top five worldwide brands,” Enderle told the E-Commerce Times. “IT doesn’t buy cool … . I expect we’ll see them invest more in making sub-brands like Lumia and Windows cooler instead.”

Improving the user experience might make Microsoft cooler, “but it shouldn’t buy a sports car and start cruising the bars,” Gottheil remarked.

The biggest threat to Microsoft is Chrome OS, suggested Gottheil.

“Microsoft has to offer the convenience, simplicity and cost-effectiveness of both the Chrome OS and Google Apps platforms,” he advised.

On the plus side, Azure’s connection to the Internet of Things will pay off.

Rapid market changes and the arrival of increasingly disruptive new technologies such as IT-in-a-box offerings like VCE and artificial intelligence might be a problem, Enderle said. “Staying on top of these trends so Microsoft can ride them rather than be buried will remain one of Nadella’s most difficult tasks.”