Motorola unveiled its much-anticipated first Android phone on Thursday, together with a new service it calls “Motoblur.” 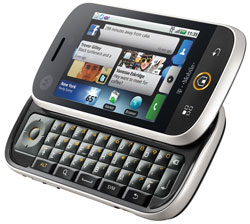 The phone, to be called the “Cliq” in the United States, will be available from T-Mobile later this year.

It will be marketed as the “Dext” abroad.

Motoblur is a system that syncs contacts, status posts and messages, among other things, from various sources, including social networking sites and email, and delivers all of these to the device’s home screen automatically.

Motorola is rebuilding its flagging handset business around Android in a bid to claw its way back up in the smartphone market.

Cliq-ing on the Handset’s Specs

The handset is equipped with a 5-megapixel autofocus camera that has picture editing and geotagging features. The Cliq also offers DVD-quality video playback.

Battery life enables up to six hours of continuous usage and up to 325 hours of standby time.

The Cliq will be offered in titanium and white color schemes. The handset weighs 5.6 ounces and measures 2.28 by 4.49 by 0.62 inches. It can take a microSD card to give it up to 32 GB of data capacity.

The Cliq has a proximity sensor, an ambient light sensor, and an accelerometer. It supports WiFi and Bluetooth 2.0 + EDR, it has a high-speed MicroUSB 2.0 connector; and it comes with GPS.

Users can get “thousands” of apps and widgets from Motoblur, Android Market and Google mobile services, Motorola said.

Preloaded applications include QuickOffice with document viewing and Google apps such as Google Maps, Google Search, YouTube and Gmail. Other apps include Accuweather and, for music and audio, Amazon Music Store, Imeem, Shazam and LastFM.

Motoblur features include caller ID, a phone book which synchs personal and work contacts and connected social networks such as Facebook and MySpace. The Cliq also offers access to Picasa and Photobucket through Motoblur.

Other Motoblur features include a customizable home screen; widgets for status posts and RSS; and messaging through Facebook, MySpace and Twitter.

The Cliq will run on WCDMA, GSM, HSDPA A, EDGE, GPRS and AGPS networks.

Motoblur is designed to put updates and notifications from various sources on the user’s home screen. That includes friend feeds, status updates, wall posts, bulletins and photo uploads. Also, users can scroll through messages and respond to them in any format from the home screen.

From the home screen, users can update their status to multiple social networks at once. They can track news feeds and other information from the home screen and integrate their calendars into one widget that appears on that screen.

This integration provides a user experience which interests IDC senior research analyst Ramon T. Llamas. “Sure, the Palm Pre and HTC smartphones offer seamless integration of social networking and other features, but are those experiences as seamless and intuitive as on the Cliq?” he asked. “I’m a little more bullish on the Cliq than I am with other phones, and I’m not usually like that,” he told LinuxInsider.

For security, Motoblur lets users save contacts, log-in information, email and social networking messages on a secure server. Integrated Assisted GPS (A-GPS) makes a lost Cliq easy to find. Owners can wipe data off their devices remotely when these are lost or stolen.

“There is a need for automatic backup and restore as customers continue to store big files on their mobile devices,” said Julien Blin, principal and CEO of JBB Research.

“The size of multimedia files continues to increase, so solutions like this are set to be a must-have,” Blin told LinuxInsider. “I know of one French company that has developed a very popular app for this.”

With all the Android phones expected to hit the market in coming months, vendors need differentiators to make their handsets stand out from the crowd, and Motorola sees Motoblur as that differentiator.

“With Motoblur, we are differentiating the Android experience for consumers by delivering a unique mobile device experience designed around the way people interact today,” Sanjay Jha, coCEO of Motorola and CEO of Motorola Mobile Devices, said during a keynote at GigaOM’s Mobilize ’09 conference in San Francisco, where the Cliq and Motoblur were announced.

However, Motorola is not the only vendor with a customizable user interface, JBB’s Blin pointed out. “HTC developed the Sense UI, and Sony Ericsson developed one called ‘Rachael,’ so this is becoming a bit of a trend.”

Can Android Save Schaumburg?

Although Motorola has rebuilt its handset business around Android, the Cliq and Motoblur alone may not be enough to save that business.

“Only a device like the iPhone can have a significant impact on a handset vendor’s financials,” JBB’s Blin said. “The Cliq is not the iPhone.”

“Motorola has to take many, many steps to ensure its survival worldwide and return it to profitability,” IDC’s Llamas said. “Is the Cliq a good first step? Absolutely. But it’s not going to single-handedly change things.”

The Cliq will be released to retail in the United States in the fourth quarter, Motorola said.