You need spend only five minutes with Motorola’s Devour smartphone to realize how appropriate its moniker is. It’s an information gourmand’s delight. 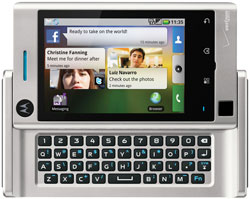 What sets Devour apart from other Android phones is Motorola’s MotoBlur software. The phone, which is offered by Verizon Wireless, allows you to funnel a host of information from email accounts and social networking sites into a single home screen on the phone.

On the screen’s central panel are widgets for displaying your online status, “happenings” from your friends, and a universal in-box.

By sliding a finger from left to right on the mobile’s 3.1-inch capacitive color touchscreen, you can access the home screen’s left panel, which initially contains widgets for news headlines, music playlists, current weather and an analog clock.

Slide your finger in the other direction and the home screen’s right panel rolls into view. It has some help widgets for using the phone, a stock market app, a Google search bar and Verizon Navigator.

As with other Android phones, search terms can be spoken into the phone’s microphone and turned into text on the Google search line.

Verizon Navigator is a paid subscription service from the carrier. For US$9.99 a month, or $2.99 a day, you can get turn-by-turn auto navigation, local search for points of interest, and detailed maps.

Having so much information in a single device like Devour can be worrisome, but MotoBlur neutralizes your worst nightmares.

All your contacts, account log-ins, home screen settings, email and messages from your social networks are backed up to the MotoBlur portal located in “the cloud.”

If you misplace your Devour, the portal also can be used to find the mobile through its built-in aGPS technology. In addition to satellites, aGPS can use location sources such as cellphone towers and local networks to pinpoint a device.

As a last resort, you can use the portal to remotely wipe the phone of all information.

The Devour’s silver aluminum body with black detailing is very handsome, and its rounded corners and beveled ends give it a sleek look. It’s on the heavy side at 5.89 ounces, but that heft gives it a solid feel that’s missing from some lighter phones.

The unit’s HVGA display occupies the top of the device. Information, graphics and multimedia appearing on the screen are very sharp. That’s especially important with this phone, because it does cram a lot of information on the display at times.

Three “soft” keys are located at the bottom of the screen. They’re primarily used for calling up menus, returning to the home screen and backing through menus.

A small black square below the left corner of the display provides optical navigation. It’s sort of a miniature trackpad. Because of its size, though, it’s difficult to use.

On the left side of the phone is a micro USB port. It’s used to charge the Devour’s 1400 mAh lithium ion battery with, according to Motorola, a standby time of 443 hours and usage time of 389 minutes.

At the top of the phone is the power button and a headphone jack. The phone will play a variety of audio and video files, including MP3, MPEG4, AAC and H.264.

At the back of the Devour is the lens for its camera, which includes a digital zoom. It takes three megapixel stills and video at 23 frames per second. Some photo editing — such as cropping, rotating and geotagging — can be performed in the camera.

On the right side of the unit are controls for raising and lowering its volume, toggling voice commands on and off, and quickly accessing the camera or camcorder. The camera control is marked but the other buttons are unlabeled, so you have to memorize what they do.

A Cozy Place to Live

Typing duties on the Devour can be performed on a slide-out keyboard. The Qwerty clavier has good-sized keys for its size and an excellent tactile feel. What’s more, the curved ends of the keyboard are ergonomically designed to fit comfortably in the hands. That makes it easy to type on the unit while standing.

The Devour comes with the typical Android array of Google applications — Gmail, Google Talk, YouTube, Google Search, Google Maps and Google Maps Navigation. Additional applications can be downloaded from the Android Market, which has between 20,000 and 30,000 apps.

If you’re a person who lives in your phone, the Devour will make it a cozy place to be. It will keep you connected everywhere you want to be connected, so you never have to worry about missing a happening or message from your friends or coworkers.