The latest Android-x86 Project release takes us one step closer to using the Android OS on a desktop or laptop computer. However, the project suffers from stability and reliability issues. If you want one Linux-based OS to run on all of your devices, Android-x86 could become a viable alternative. The major advantage to running Android on all of your devices would be keeping all of your settings, apps and Google services on an equal footing. That is not happening yet, however.

It certainly is more refined, but it is a work that needs more progress.

The Other Android OS

The Android-x86 project is an unofficial initiative to port Google’s Android mobile operating system to run on devices powered by Intel and AMD x86 processors instead of RISC-based ARM chips. It is not the actual Google-sponsored Android release.

Using it is somewhat akin to working with a third-party mod available for rooted Android smartphones and tablets. The 4.4-r3 release is based on the Google Android 4.4.4_r2.0.1 (KTU84Q) release.

The 4.4-r3 release is based on the GoogleAndroid 4.4.4_r2.0.1. or KTU84Q, release. Parts of it appear to containcomponents from the community built distribution of Cyanogen Mod’s AndroidOS.

The experience of running this Android release on a non-phone or non-tablet is not yet very solid. This latest unofficial Android release is still the KitKat version. That is not a drawback, however. Version r3 brings the project one step closer to catching up to Google’s official Lollipop release.

I installed Android-x86-rc3 on a laptop that runs Windows 7 and a major Linux distro. By comparison, the Android-x86 version ran much faster than the earlier Android version on the dedicated hardware. I replaced that RC1 installation with the R2 release but did not review it.

Improvements since the 4.4-r2 release include an upgrade to Linux kernel 4.0.8 with more drivers enabled to support modern hardware. There’s also support for the Baytrail platform, and Bluedroid has been swapped out for the Bluez stack. Bluetooth works much better now.

There’s a new HAL sensor to support GPS and an update of Mesa to 10.5.9. Hardware acceleration is enabled for Nvidia chips (nouveau) and VMware (vmwgfx).

The developers fixed code and added x86-specified code so that the system runs smoothly on x86 platforms, especially for tablets and netbooks, according to Huang. It is easy to install image and grub2-efi to GPT partitioned disks.

Getting this Android version required jumping through some hoops, but the problem I encountered may no longer exist. I may have been caught up in the stampede to download the files.

If you try to get the files from the project’s website’s download page, you will not find the link to the R3 release. You will see all the earlier versions, however.

Instead, you have to go to the release notes page.

Under that note are two file name links. Clicking on either one starts the download from Google Drive — maybe.

Sourceforge is in a disheveled state, as many developers are fleeing it due to recent policy changes.

This Android-x86 Project release contains two files. One is the ISO file that can be booted on devices with legacy BIOS. The other is the EFI image that can be used on more modern devices with UEFI firmware. Choose the one that matches your hardware.

Make your life simpler by trying the ISO file first. It will boot on most computers. The first screen offers the choice of running in live session without installation or going directly to the installation mode. If all works well on your hardware when you run the live-session-only mode, reboot and select the installation mode. You also can choose the VESA graphics mode or the DeBug option.

You can not do that with a live session from the DVD. The USB installation lets you plug in the stick and run Android from any cooperating computer — or you can dual boot to your favorite computer’s hard drive.

I had little to no trouble running the ISO file on several of my cache of computers. One relatively new desktop box, however, refused to run either version. On other gear, I got an error message: The installer has stopped working. Subsequent reboots got beyond that glitch.

There were no complications when I installed Android-x86 to the USB drive. Directions for using the dd method in a terminal window appear on the download screen.

I had no problems with Android-x86’s performance on any of my computers, except the one noted above. However, there are known issues with the release regarding suspend and resume on some systems. Also, be aware that the installer can not format ext3 file system.

You have to adjust your navigation process on non-touch screens. Android was designed for touch and swipe.

A ring-shaped mouse pointer is the clicking indicator. To accomplish some navigating actions, you hold down a key on the keyboard, or click a mouse button to move from one desktop to another, for example. Or, grab the notification bar and pull it with a downward motion of the mouse while pressing the left button.

A first run with Android-x86 for the PC requires creating or signing into a Google account. The process also involves configuring the WiFi connection.

If you do not sign in with a Google account, a plain vanilla Android loads. This gives you access to the Internet through the default Android Web browser. There is no other browser option available.

Accessing the Google Play store requires Google credentials to proceed. You have basic functionality to use the preinstalled apps without registering your Google account. If you sign in to your Google account, however, all of your Google Chrome or other mobile Android settings populate your PC’s new OS. 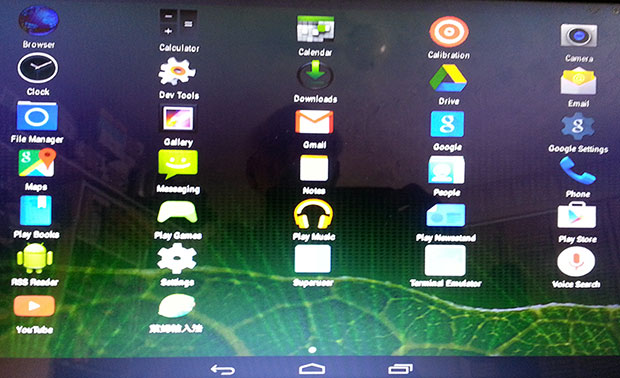 Android-x86 has two home screens. The default background for each one is an ugly green. Six live wallpaper choices are available in Settings. Two other choices — in Wallpapers and in Gallery — are listed. However, every time I tried to look there, an error window announced that Trebucket had stopped.

Each home screen has a Google search box for typing and a voice input icon at the top center of the screen. The home screen layout is considerably changed from previous versions of Android-x86.

Across the bottom of the Android screen is a transparent dock row holding the expected Return button, Home button and Recent Apps button. Above it is another transparent row holding five icons: Youtube, Google Music Play, The apps Drawer launcher button, SMS messagng launcher and the Web browser launcher.

If you have running applications, clickingthe Recent button displays them in a row of thumbnails of each app. Clickon the desired app to switch to a full-screen access to that app.

At the top of each screen above the Google search window is a translucent panel bar. It does nothing but anchor to the right side a digital clock, a battery status icon and WiFi indicator.

If you have running applications, clicking the Recent button displays them in a row of thumbnails. Click on the desired app to switch to full-screen access to it.

This latest release shows nice refinement in the concept of running the Android OS on a desktop or laptop on devices powered by Intel and AMD x86 processors instead of RISC-based ARM chips. However, you still can not count on its reliability without more stability being hammered into the next release.

Sometimes in a live session, depending on the hardware running it, the Web browser failed to start and issued an error window. Other times, after rebooting the same hardware, that problem went away. I also had that problem with computers running an installed version on a hard drive or USB drive.

If those were the only major glitches, I could be more forgiving — but the more I used this release on a variety of desktops and laptops, the more disappointed I felt by its performance. More times than not, apps either failed to open at all or opened and then crashed shortly afterward. Reboots sometimes solved those problems temporarily, but the developers need a more permanent solution.

Until that happens, I can not enthusiastically recommend serious consideration for this phase of the Android-x86 project. I do, however, impatiently wait for the next even more-improved version. I want to fully buy into the one-Android-for-all-devices concept.