Nexus One First In Line at the Froyo Dessert Bar 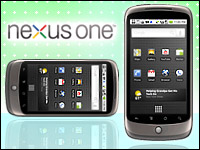 Google has begun rolling out Android 2.2 in over-the-air updates to owners of its Nexus One smartphone.

Android 2.2, also known as “Froyo,” has several new features, including a few that target the business market.

Updates for other Android smartphones will have to wait until their customized interfaces have been tweaked to work well with Froyo.

Exchange administrators can remotely wipe Android smartphones running Froyo. An auto-discovery feature makes it easy to set up and sync an Exchange account using just the user name and password. This is available for Exchange 2007 and higher.

Onscreen camera buttons provide access to a new user interface for controlling zoom, flash, white balance, geo-tagging, focus and exposure. A camcorder button also lets users set video size and quality for multimedia messaging service (MMS) and YouTube. The LED flash has been enabled for the camcorder function so users can shoot videos at night or in low-light settings. Users can peek into picture stacks using a zoom gesture through the gallery feature.

Froyo lets users turn some Android smartphones into portable WiFi hotspots for up to eight devices. Users can use a smartphone running Froyo as a 3G connection for those laptops by connecting both with a USB cable.

Why the Nexus One?

Google’s Nexus One smartphone did not seem to sell very well, and the company has taken down the smartphone’s Web sales page. Why, then, is Google rolling out Froyo to the Nexus One first instead of picking really hot devices like the HTC Evo, which has sold out repeatedly for Sprint?

“The Nexus One represents Google’s own take on the device, and it makes sense to roll out improvements in your own sandbox first,” IDC’s Llamas explained.

“With the other manufacturers, Google has to work through the add-ons and layers of architecture that go on top,” Llamas pointed out.

“Bottom line: All the other Android smartphone users, don’t freak out, your turn is coming,” Llamas said.

There are reports that Google and HTC are tweaking the latter’s Sense user interface for Froyo and that Froyo will come to some HTC devices in the fall, but both companies did not respond to requests for comment by press time.