The Obama administration on Tuesday targeted patent trolls with a number of initiatives aimed at curbing activity it blames for stymieing innovation in America.

The initiatives include five executive orders and seven legislative recommendations that will “protect innovators from frivolous litigation and ensure the highest-quality patents in our system,” according to the administration. 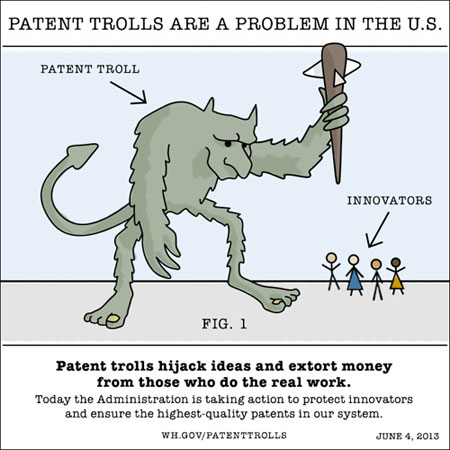 Patent trolls have been accused of abusing the system to squeeze money from just about anyone using technology containing their intellectual property. However, they’ve also been praised for protecting small inventors from being crushed by corporations.

Patent trolls are creating problems in the system, but caution must be exercised when addressing the problem, Mixon advised.

For example, one congressman has proposed barring patent holders from exercising their patent rights unless they’re using the patent in a product.

“That kind of Draconian approach would backfire in a large way,” Mixon said.

One way it could backfire is by hurting the people it’s designed to help by removing a means of legal recourse.

“If inventors cannot get their day in court, then our nation will suffer,” Raymond Van Dyke ofVan Dyke Law told the E-Commerce Times.

“I’ve been litigating against patent trolls for at least 30 years,” he told the E-Commerce Times. “It’s just a model that’s caught on, and more people are jumping on the bandwagon.”

Money is big contributor to the practice’s popularity.

“The problem isn’t with the patent system. The problem is it’s too easy to bring a suit, knowing full well it’s nonsense, but expecting to get away with it anyway,” he maintained.

“There are mechanisms in place for punishing people who litigate in bad faith,” added Gorenstein, “but courts aren’t frequently using them.”

Accountability is a key concern when dealing with patent trolls, noted Jonathan Rothwell, an associate fellow at the Brookings Institute.

“They really can’t be punished by consumers,” he told the E-Commerce Times.

If a corporation abuses its patents, it will be publicized in the media and consumers will become aware of it.

“People can stop buying that company’s products, and that will act as a deterrent against that abusive behavior,” he explained. “But with these patent assertion entities, they’re not selling anything, so there’s no accountability for abusive behavior — other than the legal system itself, which they’re expert in navigating.”

Actions implemented by the administration designed to address perceived problems created by patent trolls include the following:

The administration also proposed the following legislative actions as part of its war on patent trolls: