On the ‘Fake Linus Torvalds’ and the Nifty Nokia N900 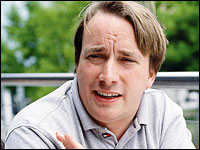 You know it’s a good day when included among all the dry-as-dust press releases that arrive on your virtual desk is one that promises to combine Linux, Twitter and “dangerously outrageous” fun.

Sure enough, from none other than the Linux Foundation came the tantalizing announcement of the “Fake Linus Torvalds” promotion, which itkicked off last week.

Believe it? It’s true, and in no time Linux Girl’s spine was tingling with excitement.

Following in the footsteps of the controversial Fake Steve Jobs — who, Linux Girl can’t resist casually mentioning, is a former colleague from her dark pre-Linux days — four Torvalds knockoffs are now tweeting from the Linux Foundation’s Identi.ca and Twitter feeds, posing as the real Linus.

“I expect some of them to be dangerously outrageous, while others will just be downright funny,” Jim Zemlin wrote on his blog.

Two weeks before next month’s LinuxCon in Portland, Ore., the Linux Foundation will solicit votes to determine which was the favorite fake, with a chance for voters to win free admission to the event and be present for the official unveiling of the four impostors.

Can’t wait until then? Fear not: There’s already a rap parody to build the excitement.

Now, it seems safe to say that for many Linux geeks, Twitter isn’t exactly a natural platform, tailored as it generally is to those of the more extroverted — some might say downright chatty — persuasion.

Even so, Linux Girl couldn’t help but wonder how Linux bloggers would react.

“Please tell me this isn’t true,” wrote rtmie on Linux Today, for example. “Linux Foundation engaging in marketing inspired ‘funniness’. Has there ever been an example of this that hasn’t ended up being embarrassing?”

There will be an easy way to tell the difference between the real Linus and the fakes, Jimmy the Geek added: “The real one is too busy to tweet.”

Similarly: “More proof that twitter is for twits?” was the title of caitlyn’s reaction on LXer. “The Linux Foundation is doing this on purpose? Why? To look stupid?” she wrote.

“I guess even geeks must have their fun” was blogger Robert Pogson’s philosophical response. “The more FLOSS and GNU/Linux becomes mainstream, the more we must expect all forms of human behavior to be involved.”

Anyhoo, on to the real business at hand: The blogosphere was positively buzzing last week with news of Nokia’s N900 smartphone, which runs the Linux-based Maemo operating system.

Slashdot bloggers actually got wind of the upcoming announcement the Friday before last, generating more than 600 comments filled with excitement and speculation.

News of the actual announcement hit the blog on Thursday, resulting in some 450 more comments.

“The iPhone was a ‘fail’ for me for several reasons,” wrote blogger popo, for example.

With strong words like that, Linux Girl had no choice but to solicit some more opinions.

“The market has been waiting for something like this ever since Nokia brought out the V770,” Slashdot blogger drinkypoo told LinuxInsider. “Pairing a device to a phone has become problematic, with some providers expecting you to pay additional fees because data is being sent through your cellphone instead of merely to it, which of course makes no sense at all from the consumer’s standpoint.”

Even more so: With the N900, Nokia “has finally managed to potentially change the mobile game in their favor,” analyst and Slashdot blogger Christian Gross said.

The simple fact that the handset is Linux-based “is not that relevant,” since Android is Linux-based too, Gross told LinuxInsider. “What makes this device different is how Nokia uses Linux.”

First, “maemo is a community that exists and has applications from the community itself,” he explained. “This is what has made Apple so popular and Palm Pre wanting.”

Of course, to surpass the iPhone, the N900 has to deliver something that is not already available, he noted.

“The N900 is a game-changer because it is the first device that offers the user a lifeline,” Gross asserted — as in “tracking your life timeline from time X to time Y.”

With a camera, GPS, 32 Gigabytes of memory, keyboard, large screen and social networking built in — combined with the Nokia Betalabs tool Web Server — the N900 “will be a device where your life can be stored as digital pieces of information,” he said.

‘Should Apple Be Nervous?’

Further, with Linux, “Nokia has the ability to smoothly and easily run server processes that can manage the lifeline,” he added. “Sure Android uses Linux, but Android is reliant on getting the right hardware to make the lifeline viable. Nokia, on the other hand, is in control of the hardware and can optimize the running of server processes so that you are not constantly searching for an electrical socket.”

Nokia can also work with network providers to create “plans that generate large amounts of free cash flow,” he pointed out.

“Should Apple be nervous? Maybe,” Gross concluded. For now, however, “it is the wired telcos that provide fixed line services who should be nervous, because should such a device attain critical mass, there will be no need to ever have a DSL line. From that perspective it would make quite a bit of sense for fixed line telcos to tweak their wireless plans.”

On the other hand: “I’m fairly sure this device will not be a big thing for the average user, but I’m guessing power users and obviously geeks will be very interested,” Slashdot blogger Max Romantschuk told LinuxInsider. “My understanding is that Nokia has been very successful with nurturing a healthy open source community around the Maemo platform, so I suspect there will be a great deal of interesting applications to use shortly after the device is released.”

The device’s large screen, flash and GPS “should open up a lot of possibilities with location-aware applications,” Romantschuk noted. “Currently this has been hampered by the lack of a clear way to communicate the user’s location through the browser, but I’m betting that will be sorted out very quickly if not before launch.”

It’s hard to predict what kinds of things might become possible on such a device, “but even on Nokia’s first Linux tablet, the 770, people were able to do amazing things that it was never designed for, like booting off the MMC card,” he added. “I’m guessing the greatest aspect of the device will be its openness, which should appeal to people that shun the iPhone and similar devices due to restrictive licensing.”

On a personal note, “I could sure use one of these for reading eBooks and watching videos during my commute,” Romantschuk said, and “the ability to make phone calls is a definitive plus. ;)”

If nothing else, it is good to see an example of technology “where there is no monopoly,” Pogson told LinuxInsider. “This is a thriving environment where new ideas are not suppressed but tested by the market. Compare that with Wintel, where the netbook must be suppressed by the powers that be because netbooks threaten the monopoly.”

In fact, “the N900 continues a trend towards the generalization of the mobilephone into a portable, compact mobile computing platform,” Slashdot blogger Calum Galleitch asserted.

“Already such devices are as powerful as the computers of a few years ago andare capable of carrying out all the tasks most users require,” Galleitch told LinuxInsider. “On that basis, I suspect that such devices will end up replacing netbooks and the like as sources of cheap, portable computing.”

Ultimately, Galleitch concluded, “we could end up plugging screens and keyboards into our mobiles, doing our work, then unplugging them and going on our way.”