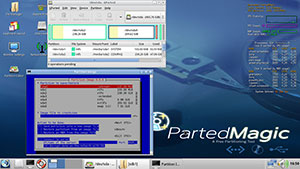 I started out looking for a handy disk partitioning tool to repair a colleague’s ailing computer. I ended up finding a toolbox full of very handy repair and system maintenance apps. As a bonus, I got all of this packed into a nifty specialized Linux distro called “PartedMagic” that boots into RAM from a CD or USB drive.

PartedMagic is compact and lightweight. Having a live distribution built around GParted is a failsafe way to use Linux to manage your computer’s hard disk. Normally, any OS will partition the hard drive as part of the installation process. But most OSes give you little or no control over the disk partitioning options and lack much of a useful interface. Even the great variety of Linux distros can leave users guessing about what size and other options to select when making new volumes on a hard drive.

PartedMagic is as close to worry-free partitioning as I have found. I’ve used the stand-alone partitioning app GParted many times. It’s one of my staples in setting up computers. But it has drawbacks when you work on a broken system.

With PartedMagic as a complete solution to work with GParted, I have a relatively safe and reliable tool to partition a fresh disk or repair a broken partition table on a working computer. I have also used it to recover files from a broken computer as well as repartition and format hard drives. These tasks can usually cause considerable anxiety out of fear that a mistype in a command line entry will destroy data — or worse.

The graphical user interface (GUI) PartedMagic uses takes the already handy GParted interface and extends it into a fully-functional Linux desktop. This environment is independent of whatever else runs on the ailing computer. This specialized Linux distro makes creating or adjusting disk partitions a no-brainer.

Unlike typical app chatter that we present each week in Linux Picks and Pans, this week’s pick is less about an application and more about an entire Linux distro. That is because PartedMagic is a rarity. Think of it as the ultimate Linux app compilation.

The concept behind PartedMagic is Linux at its best. Having a complete Linux distro that runs in a live CD/DVD/USB environment is sheer genius. It requires no first-use configuration typical of any OS installation. It is relatively fast. It boots the computer and loads into system memory in under 60 seconds.

PartedMagic finds the Internet connection, puts useful system information in a desktop widget display, and has an impressive menu of connectivity, productivity and system tools one click away. It even includes the Firefox Web browser for instant Internet access.

This distro is based on Slackware. The current version is 6.6, released on Aug. 3. Its graphical environment comes from LXDE (Lightweight X11 Desktop Environment) and X.Org and has a customisable panel with a digital clock and a Start button to access the main menu. Prefer a text-based menu? No problem. It’s in there. These factors account for PartedMagic’s low-resource impact and ability to run completely in RAM.

I run Puppy Linux with various desktop options on all of my desktops and laptops as a second choice to Ubuntu Linux. Puppy Linux loads from CD or USB and fits into RAM. So I am very much at home with the similar approach used in the PartedMagic distro. In fact, PartedMagic has many of the core programs endemic to many Linux installations.

For instance, this specialized partitioning distro has built in great accessory apps such as AlsaMixer, Archive Manager, Calendar, Conky, Galculator, Leafpad, Midnight Commander and Music Player. It also has GPicView Image Viewer, ClamAV and a host of standard Internet and connectivity tools.

PartedMagic also comes with GParted, Clonezilla, Partimage, TestDisk, Truecrypt, G4L and SuperGrubDisk. And if all of this is not enough crammed into a 45MB envelop, you will also find fdisk, sfdisk, dd and ddrescue). Go to the PartedMagic website for well-written and very detailed user guides.

The opening menu resembles a dual-boot screen. Even before PartedMagic boots the system, this specialized Linux live distro has options to solve any contingency.

For example, you can specify how the temporary OS will load. The options are quick impressive. They range from default settings running in RAM or running in low RAM to booting into an alternative graphical server or boot sector on the physical hard drive.

Another pre-boot option is to select the Failsafe Menu. Here you can trim exactly how and what devices you want loaded. These choices can quickly get you booted when onboard drivers are corrupted or other graphics card issue exist.

The startup routine ends with an automatic ejection of the boot CD. Cool stuff.

The Logout menu lets you reboot or shut down. Or you can save the current session or exit from the GUI to the Main Menu. This last option is really handy. You can also select Xorg to start the LXDE desktop environment or manually configure your choice of Xorg or Xversa video (screen resolution) settings.

Remember, PartedMagic does so much more than just partition hard drives. It is a specially crafted Linux distro designed to diagnose and repair broken stuff short of replacing hardware.

To that end you can jump directly to scan and repair disk partitions as well as back up and restore disk partitions. Final choices let you eject the PartedMagic CD, power off the computer, restart the computer or exit the menu and return to shell.

Try doing all of that in whatever other Linux distro you use. Except for not having a package management system and high-end text, video and audio production apps as part of the mix, I could very comfortably use PartedMagic as my distro of choice.

Besides the system readout widget on the desktop, PartedMagic has seven core component icons in the display. Like any desktop icon, these function as shortcuts to the most useful or often-used components. What you see are File Manager, System Profiler, Keyboard Layout, Disk Health, Monitor Settings, Network Manager and Partition Editor.

This last icon loads what is perhaps the key need for this entire distro. Partition Editor is the GNOME Partition APP known as “GParted.” For detailed help in using each of these apps within the live distro, see the documentation on the developer’s website.

The traditional Linux app panel at the bottom of the screen shows much of what you expect in Linux. Visible are time, Internet connection and sound volume indicators on the right end. On the left end are the menu list, the mount devices icon, the LXTerminal icon, an icon that opens a detailed help window and the workplaces switcher panel.

Right click on any open space on the panel to access the setting controls window for the Task Bar and Panel options and settings.

PartedMagic is the Swiss Army Knife of OS repair wrapped into a very functional Linux distro. It is fast, tiny and easy to use. It has bundled inside all the essential open source disk management tools you will ever need in an emergency.

But it does so much more than merely changing the disk partitions. So you will use it more than just needed the GParted functionality. If you maintain more than one computer, you will quickly wonder how you survived without it.