Pondering a Peck of Possible Pads 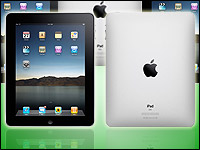 Well, it’s been a few weeks since the launch of Apple’s comically named “iPad,” and there’s no doubt the world has much to think over.

That’s particularly true for those in the FOSS community, of course, given the decidedly closed nature of Apple’s new device. Fans of Cupertino may be swooning with delight, but the picture is less clear for those of us in the rest of the world.

To wit: as part of its Defective by Design campaign against DRM, the Free Software Foundation delivered its “iPad is iBad for Freedom” petition to Apple CEO Steve Jobs last week, demanding that he drop DRM on all Apple devices.

The new device is “a frightening step backward for computing and for media distribution,” according to the FSF.

Given that more than 5,000 signed the petition in just 24 hours, it appears many people agree.

“This thing is just complete fail,” wrote RJakiel among the numerous comments on Linux Today, for example.

“I can’t really think of anything this can do that a netbook with a 3G modem plugged in can’t do,” agreed Shiva.

Luckily, help may once again be on hand from the wondrous world of FOSS.

Specifically, MSI is readying an Android-powered tablet that’s said to address many of the iPad’s key shortcomings. It has a camera, for one. Plus, it runs free on the FOSSy plains without having to submit to the ever-present Jobsian shackles.

“I’m excited about this announcement,” wrote rotide among the hundreds of comments posted on Slashdot.

Word has it, in fact, that Asus is also working on something similar.

What does it all mean for computing — and, more importantly, for free and open source software? Linux Girl felt compelled to find out.

“The JesusPad doesn’t fit in my purse, and I’d rather carry around a purse and a closed laptop instead of a purse and a protective carrying case for a product that is missing a lot of basic features,” asserted Barbara Hudson, a blogger on Slashdot who goes by “Tom” on the site.

“Will Apple sell a lot of these ‘Newton Nouveau’ JesusPads?” she added. “Probably … but you can be sure that by the Christmas shopping season, the competition will have full-blown computing tablets that will offer better value, and anyone who buys the first generation is going to be screaming when the next one comes out with a camera.”

Having no camera is a critical failure, Hudson opined.

“A lot of the potential market — college and uni — is going to go ‘Huh?!?'” she predicted. “Then again, the Newton didn’t have a camera, and it still sold like …. oh yeah, that’s right, it sold like 3-week-old fish.”

“I’m remarkably concerned about the iPad,” Slashdot blogger Jeremy Visser told LinuxInsider. “As a tinkerer and hacker myself, I can’t help but be disappointed by the fact that while it has a larger and more capable form-factor, it is one of the most restrictive devices of its type in terms of software freedom.”

The device is in “a strange form-factor that makes it both suitable for running a mobile OS and a tablet-optimized desktop OS,” Visser pointed out. “For example, Android or Ubuntu Netbook Remix would be equally suitable on a tablet device.”

Will the iPad be successful? “That remains to be seen,” Visser opined. “On the train and in public, I see laptops, netbooks, iPhones and various other smartphones, but I have never seen somebody with a tablet, despite devices of that category being around for over half a decade.

“To me, the iPad doesn’t add much more than an Apple sticker,” he concluded, “but that may be all it needs to be a success.”

“This is not a new idea,” blogger Robert Pogson agreed. “The particular implementation by Apple is not great because it is encumbered by Apple’s own clumsy attempts at stifling competition in its space.

“Was it only last year that Apple said it could not produce such a device?” Pogson recounted. “They saw the world passing them by and made a move.”

Apple will have to free its hardware and software to thrive globally, he opined, but “they will not as long as the egomaniacs run their show. Like M$, they have found a following who believe paying more for less is a good idea, but beyond that there is no innovation from Apple.”

The tablet may eventually find a place, Pogson concluded, “but the keyboard will remain the best means of importing data from humans for a while yet.”

‘Even More of a Niche Than the iPhone’

Tablets are “less portable than phones but less easy to type on than notebooks,” Montreal consultant and Slashdot blogger Gerhard Mack agreed. “I’m still not fond of the tablet as a device.”

The iPad will be a niche product, Slashdot blogger hairyfeet told LinuxInsider. “Look at all the hoopla we have heard about the iPhone and it is at what? Maybe 3 percent of the market?”

Tablets, meanwhile, “will be even more of a niche than the iPhone, because it is a whole lot easier to find a place to put your iPhone than it is a tablet,” he pointed out. “Sure there will be a couple of copycats, just as there are for iPhone, but I think by and large most folks spending US$400 would rather have a netbook.”

Hyperlogos blogger Martin Espinoza, for one, is eagerly looking forward to “open source alternatives with hardware superior to the iPad,” he told LinuxInsider.

“Apple’s phone includes a GPS and compass, and these days even a camera; all of these are missing from the iPad,” he pointed out.

“This would otherwise be an excellent platform for experimenting with reality overlay,” Espinoza noted. “Does Apple expect users to tape their iPhone to their iPad and connect them via WiFi, or perhaps via a magical cable which accommodates each device’s dock connector? The lack of an honest USB connector is offensive enough.”

Espinoza “would not buy a computer from MSI at any price, but given that Apple has finally dropped a product, perhaps the other hardware vendors will develop the courage to release their own competing devices,” he predicted. “Tegra-based solutions could roll out within a couple of months, with a little luck.”

In the meantime, geeks looking for a way to express their true feelings about it all can hardly do better than to submit a video to the Linux Foundation’s 2010 “We’re Linux” video contest, Linux Girl would humbly suggest.

Let’s just make sure it doesn’t involve any pads.